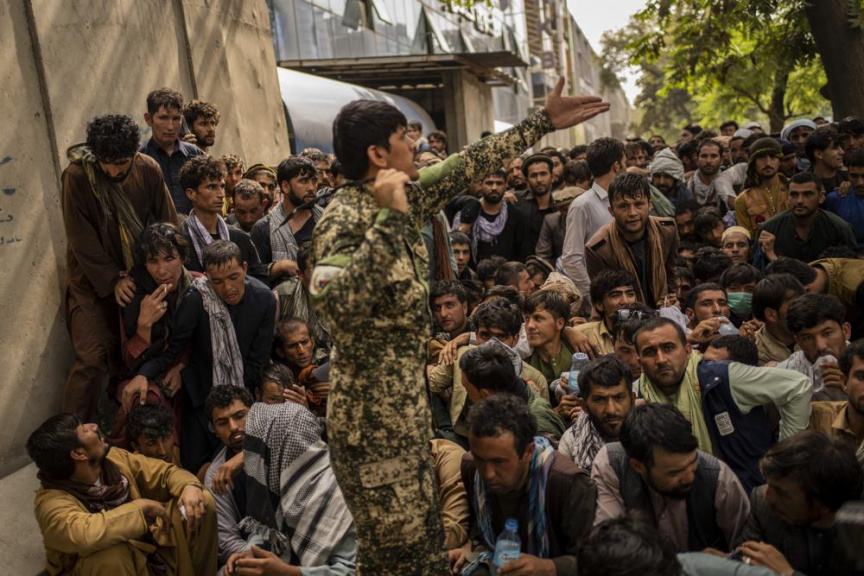 In this Sunday, Sept. 12, 2021 file photo, Afghans wait in front of a bank as they try to withdraw money in Kabul, Afghanistan. (AP Photo/Bernat Armangue, File)

KABUL, Afghanistan (AP) — The Taliban have promised plots of land to relatives of suicide bombers who attacked U.S. and Afghan soldiers, in a provocative gesture that seems to run counter to their efforts to court international support.

Addressing the gathering Monday evening, Haqqani praised the sacrifices of “martyrs and fedayeen,” referring to fighters killed in suicide attacks, Khosty tweeted. Haqqani called them “heroes of Islam and the country,” according to the spokesman. At the end of the meeting, he distributed 10,000 afghanis ($112) per family and promised each a plot of land.

Khosty posted photos of Haqqani, his face blurred, embracing the relatives in a packed auditorium.

The event comes as the Taliban attempt to open diplomatic channels with an international community largely reluctant to formally recognize their rule in Afghanistan. High-profile Taliban meetings with foreign officials have focused on obtaining aid to impoverished Afghans as the U.N. predicts virtually the entire population will slide into poverty because of a severe economic crisis.

The promise of rewards for suicide bombings signals conflicting approaches within the Taliban leadership. They are trying to position themselves as responsible rulers, who promise security for all and have condemned suicide attacks by their rivals, the militant Islamic State group. On the other hand, they praise such tactics when it comes to their followers.

The Taliban cannot afford to alienate the U.S., which froze billions of dollars in Afghan assets in U.S. accounts in line with international sanctions protocols. International monetary organizations paused disbursements, equivalent to 75% of the previous government’s expenditure.

At the same time, the Taliban cannot afford to lose their hard-line base, especially in the wake of a growing IS threat.

Suicide bombings and roadside explosives were tactics used by the Taliban to wear down Afghan and U.S. forces throughout their 20-year insurgency.

The international community has greeted the Taliban’s request for recognition with conditions, especially with respect to the treatment of women and girls.