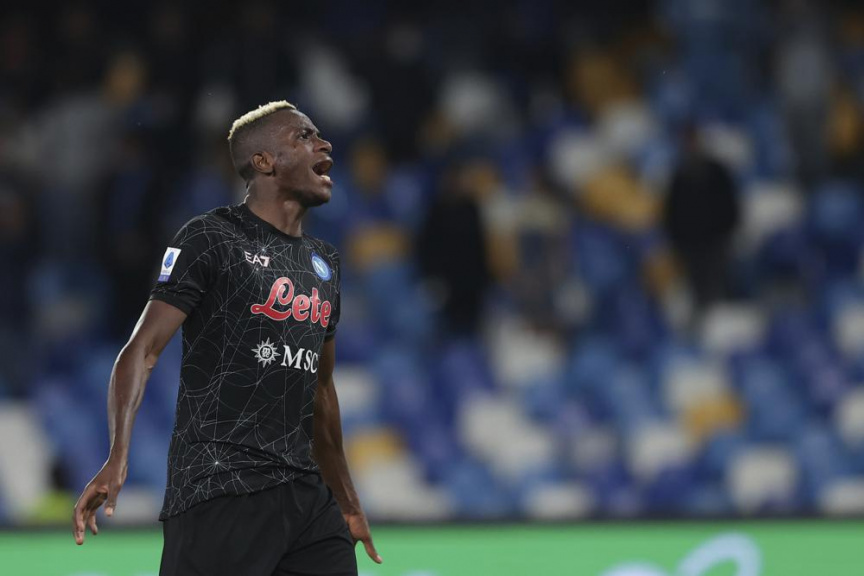 Napoli's Victor Osimhen celebrates his side's 1-0 win at the end of the Serie A soccer match between Napoli and Torino, at the Diego Armando Maradona stadium in Naples, Italy, Sunday, Oct. 17, 2021. (Alessandro Garofalo/LaPresse via AP)

ROME (AP) — Victor Osimhen soared in for a towering header nine minutes from time and Napoli extended its perfect start to Serie A with a 1-0 win over Torino on Sunday.

After Napoli captain Lorenzo Insigne had seen his weak first-half penalty attempt saved and Giovanni Di Lorenzo had a goal wiped off by VAR for offside, Osimhen came to the rescue for Napoli.

The 22-year-old Nigeria striker finished off an assault on Torino’s goal following efforts from Dries Mertens and a deflection that set up Osimhen’s header.

Napoli coach Luciano Spalletti noted how Osimhen goes for balls that he didn’t even attempt to reach earlier in his career.

“He’s becoming more complete,” Spalletti said. “And when you have strong players in attack you can always think about changing the match at any moment.”

With its eighth win in eight matches, Napoli again moved two points ahead of unbeaten AC Milan, which defeated Hellas Verona on Saturday.

Defending champion Inter Milan, which lost at Lazio on Saturday, was left seven points behind Napoli.

Napoli matched its best start, having also won its opening eight matchers in 2017-18.

In a strong performance for Napoli, Hirving Lozano hit the post in the second half.

There was only one goal but several long VAR checks as Massimiliano Allegri and Jose Mourinho renewed an old rivalry in Juventus’ 1-0 win over Roma.

Three Juventus players went for the ball and Rodrigo Bentancur’s header went in off Kean.

Juventus goalkeeper Wojciech Szczęsny then saved a penalty from Jordan Veretout after a goal from Tammy Abraham was waved off — prompting a long video review.

Roma also protested for a penalty in the second half but VAR ruled there was no foul on Lorenzo Pellegrini.

Juventus moved up to seventh while Roma remained fourth.

Before kickoff, Allegri and Mourinho shared a warm embrace.

Josip Iličić netted twice and Duván Zapata became the first Colombian player to score 100 goals in Serie A as Atalanta won 4-1 at Empoli.

Also, Sassuolo center forward Gianluca Scamacca scored twice against his former team in a 2-2 draw at Genoa; 10-man Udinese came back for a 1-1 draw with Bologna; and Cagliari finally earned its first win of the season by beating Sampdoria 3-1.

Title wait nearly over for Milan after win over Atanta

Bayern wins 5-1 at Leverkusen to go top of Bundesliga