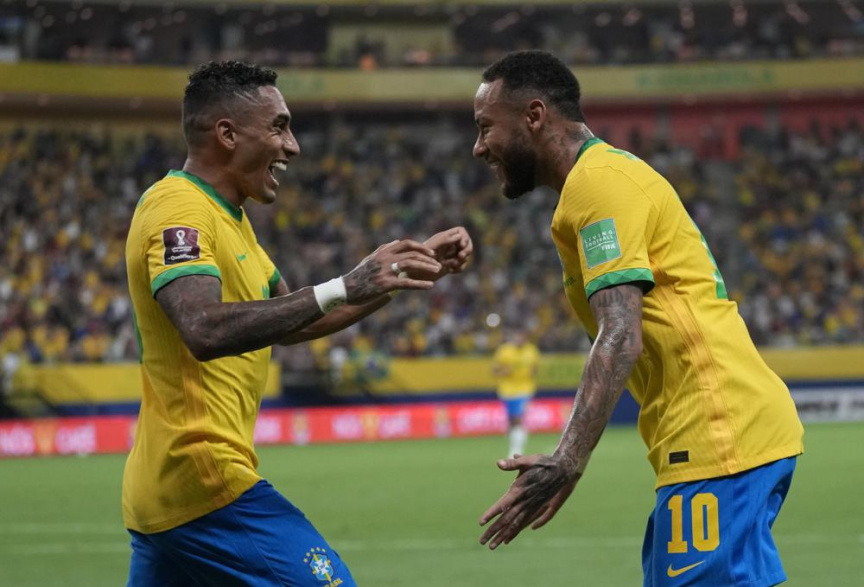 SAO PAULO (AP) — Leaders Brazil easily defeated Uruguay 4-1 in Thursday’s South American World Cup qualifying match, putting the team in standby mode for its direct spot at Qatar next year. Neymar and Raphinha shone for the Seleção in its home match at Manaus.

Second-place Argentina beat Peru 1-0 a few hours earlier and is also close to clinching a direct qualifying berth. Lionel Messi did not have one of his better days, but the hosts managed to have the best opportunities in the match.

Brazil has 31 points, more than any team that advanced in four South American qualifiers since the current format was established in 2002.

A win against Colombia in Sao Paulo in November will advance Brazil to Qatar with several qualifying matches in hand.

Argentina has 25 points, and both teams have played 11 matches.

The encounter between the two rivals in September was suspended after seven minutes of play due to COVID-19 protocols. FIFA has not yet decided whether the match will be re-played.

Ecuador remains in third spot with 17 points after a 0-0 draw at Colombia, which has 16 points in fourth, marginally ahead of Uruguay.

The top four teams earn direct entry to the World Cup next year. The fifth-place team can still qualify via an intercontinental playoff.

Playing for the first time with fans on the stands since the pandemic hit, Brazil was intense from the first minute, much different from the two latest displays against Venezuela and Colombia.

Neymar opened the scoring in the 10th minute after Fred found him in the middle of the Uruguayan defense. The star dribbled past goalkeeper Fernando Muslera and shot with almost no angle to the back of the net. It was Neymar’s 70th goal for Brazil, seven short of Pelé’s record for the team.

Leeds player Raphinha, who started for the first time for Brazil, added a second in the 18th minute from close range. And he added the third in the 58th minute with a powerful crossed shot from the left.

Veteran Luis Suarez scored Uruguay’s consolation goal in the 77th minute with a free kick. But Uruguay’s hopes were finally dashed in the 83rd minute after substitute Gabriel Barbosa headed past Muslera after a cross by Neymar, in goal that was allowed after video review.

“I can’t explain how happy I am,” said the 24-year-old Raphinha. “Tonight could go forever. I will go back focusing on what brought me here; doing a good job at Leeds. I want to come back here.”

Argentina wasted two opportunities to score in the first two minutes of the match. And it appeared it would hammer Peru when Lautaro Martinez opened the scoring with a headed goal in the 43rd minute after a cross from the right by Nahuel Molina.

But the second half showed a more intense Peru team, which had a golden chance to equalize from the spot in the 65th minute after a foul by goalkeeper Emiliano Martinez. But veteran Yoshimar Yotun hit the bar.

Martínez said Argentina had more difficulties against Peru in comparison with the 3-0 win over Uruguay on Sunday.

“Our game was more fluid against Uruguay, there were more gaps,” Martinez said. “We had a few difficulties, but we managed to always find a solution. Today we did find it.”

Also on Thursday, Chile rose to sixth position with 13 points after a 3-0 home win against bottom-of-the-table Venezuela. Erick Pulgar scored twice and Ben Brereton scored the third for the hosts.