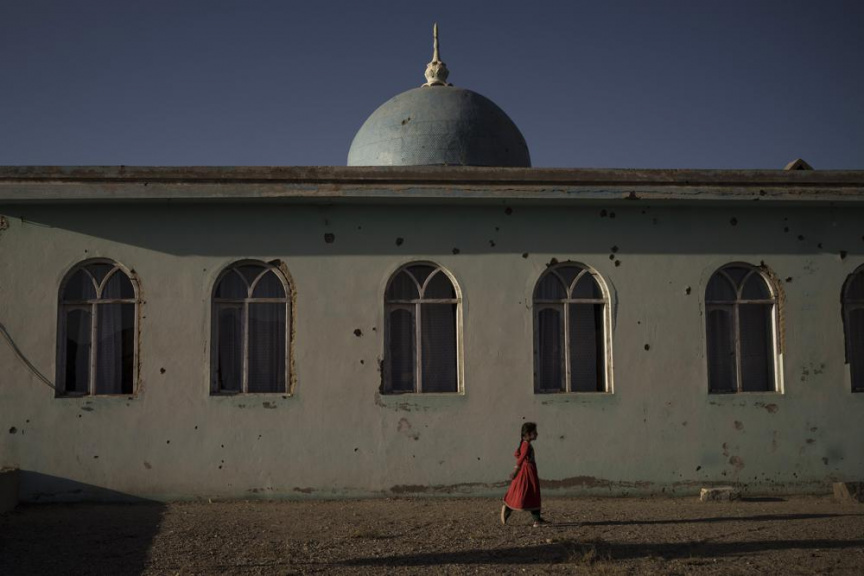 An Afghan girl walks outside a mosque marked by bullet holes at a village in Wardak province, Afghanistan, Monday, Oct. 11, 2021. (AP Photo/Felipe Dana)

ROME (AP) — The European Union pledged 1 billion euros ($1.15 billion) in support for the Afghan people, and the Group of 20 countries vowed to accelerate aid Tuesday amid concerns that an already precarious humanitarian and financial situation will grow catastrophic over the winter.

G-20 leaders demanded at a virtual summit hosted by Italy that the Taliban government allow humanitarian access across Afghanistan, keep Kabul Airport and the country’s borders open and ensure security for U.N., humanitarian and diplomatic staff. They also repeated previous demands that women’s rights be respected.

Italian Premier Mario Draghi said the meeting represented the first multilateral response to the crisis sparked by the August withdrawal of U.S. forces from Afghanistan and the takeover of the country by the Taliban.

Draghi told reporters that negotiations would be necessary with the Taliban to get humanitarian aid distributed. But he said such contact by no means constituted a political recognition of the Taliban, who he said would be “judged for what their deeds are, not their words.”

The U.N. has warned that the Afghan economy is on the verge of collapse. Afghanistan, which before the Taliban takeover was dependent on international aid that accounted for 75% of state spending, is grappling with a liquidity crisis as assets remain frozen in the U.S. and other countries, and disbursements from international organizations have been put on hold.

“We all have nothing to gain if the entire monetary or financial system in Afghanistan is collapsing, because then humanitarian aid can no longer be provided either,” German Chancellor Angela Merkel told reporters in Berlin after the summit.

During the meeting, the European Union announced a support package worth 1 billion euros ($1.15 billion), which includes 300 million euros ($346 million) that had been committed earlier. It will be targeted at the Afghan population only and neighboring countries, which have been the first to provide immediate aid.

The EU remains careful not to legitimize the Taliban interim government.

“But the Afghan people should not pay the price of the Taliban’s actions,” European Commission President Ursula von der Leyen said.

The White House said the U.S. “remains committed to working closely with the international community and using diplomatic, humanitarian, and economic means to address the situation in Afghanistan and support the Afghan people.”

Spokeswoman Jen Psaki noted at a White House briefing that the U.S. was the single biggest donor to Afghanistan, providing $330 million this year alone.

Turkish President Recep Tayyip Erdogan said in a video address to the online summit that the international community should keep the channels of dialogue with the Taliban open in order to “patiently and gradually steer” it toward establishing a more inclusive administration.

He repeated that Turkey, which already hosts more than 3.6 million Syrians, can’t be burdened with an influx of migrants from Afghanistan.

“It is inevitable that European countries will also be affected by the migration pressure that Turkey will be exposed to on its southern and eastern borders,” he said.

Erdogan proposed the creation of a working group on Afghanistan within the G-20 and said Turkey was willing to head such a grouping. Draghi said the proposal was interesting but said the rest of the G-20 would have to agree.