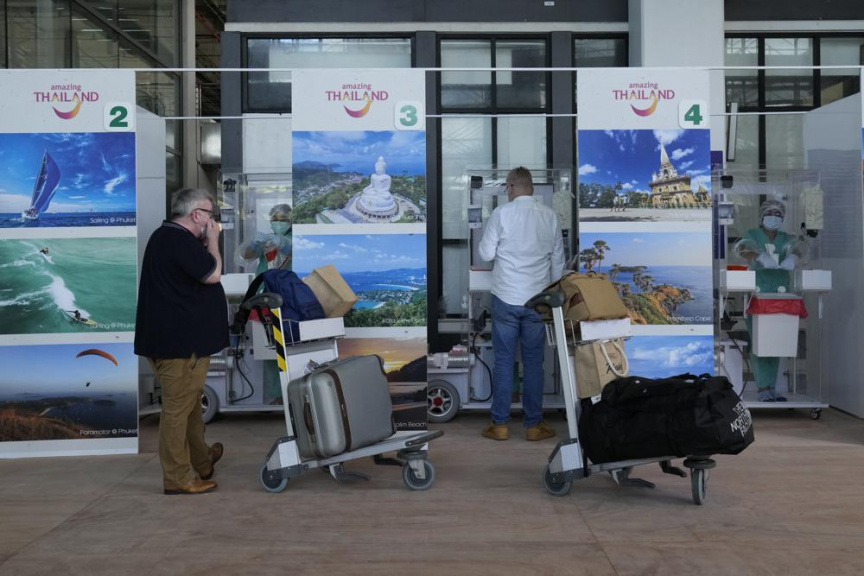 In this Thursday, July 1, 2021 file photo, the first group of tourists prepare for a COVID-19 swab test after arriving at the Phuket International Airport in Phuket, southern Thailand. (AP Photo/Sakchai Lalit, file)

BANGKOK (AP) — Thailand plans to no longer require international visitors from at least 10 low-risk nations to quarantine beginning next month if they are fully vaccinated for COVID-19, the prime minister said Monday.

In a televised speech, Prayuth Chan-ocha said the first group would include arrivals from the United Kingdom, Singapore, Germany, China and the United States. The list would be expanded on Dec. 1, and then made even more extensive on Jan. 1, he said.

Thailand’s economy has been badly hurt by the losses suffered by its huge tourism industry after most foreign visitors were barred in April last year. That policy has eased but all arrivals still faced onerous quarantine requirements.

Even now, Bangkok and other areas have a 10 p.m. to 4 a.m. curfew and other restrictions to try to tame a virulent third wave of the coronavirus that began in April this year.

“The time has come for us to ready ourselves to face the coronavirus and live with it as with other endemic infections and diseases, much as we have learnt to live with other diseases with treatments and vaccinations,” Prayuth said.

He said he has instructed the government’s Center for COVID-19 Situation Administration and the Public Health Ministry to urgently consider the plan by the end of the week. The center will also finalize which countries will be on the no-quarantine list.

All visitors will still need to show negative RT-PCR test results before embarking for Thailand and will require another test on arrival, after which they will be free to travel around Thailand.

Visitors from other countries will still have to quarantine and meet other requirements.

Prayuth said the authorities will also consider allowing the consumption of alcohol beverages in restaurants as well as the operation of entertainment venues from Dec. 1 to support the revitalization of the tourism and leisure sectors during New Year’s celebrations.

“We will have to track the situation very carefully, and see how to contain and live with that situation because I do not think that the many millions who depend on the income generated by the travel, leisure and entertainment sector can possibly afford the devastating blow of a second lost New Year holiday period,” he said.

In June, Prayuth had spoken about reopening the country around mid-October.

Thailand tested the waters by reopening the popular resort province of Phuket in July to fully vaccinated visitors without quarantine, allowing them free movement on the island for 14 days and then onward travel throughout the country.

The efforts to reopen had been hindered by a late-starting national vaccination campaign. Prayuth’s critics charged he failed to secure adequate vaccine supplies in a timely manner, and his government has had to scramble since mid-year to acquire more.

Last month, the government said it plans to secure 178.2 million vaccine doses in 2021, and targets at least 62 million people, or around 90% of the population, to be fully vaccinated this year.

Thailand reported 10,035 confirmed COVID-19 cases and 60 related deaths on Monday, bringing a total since the pandemic started to 1.7 million and 17,751 deaths. The daily number of confirmed cases had surged to over 20,000 in August. More than 98% of both confirmed cases and deaths occurred after the third wave this year.