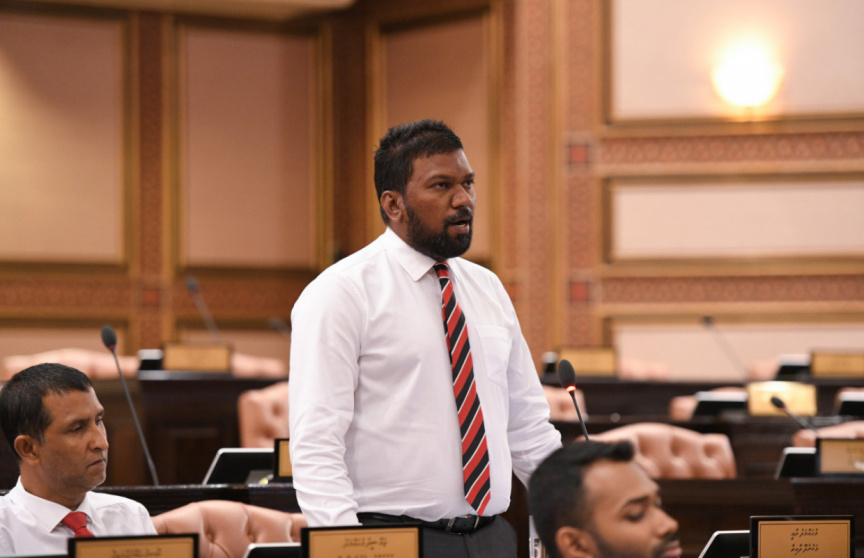 Makunudhoo MP Mohamed Raai has stated that Minister Imran Abdulla had lied whilst answering the questions posed to him at the parliamentary question session held on Monday morning.

Minister Imran was summoned to the People’s Majilis today – to be questioned regarding the physical works underway at Neykurendhoo Prison.

Responding to the question – Minister Imran said that by the end of the last year, the area at which the prison will be constructed at has been marked. Noting that a compensation of MVR 321,000 needed to be paid for the plants in the allotted area for the prison which would be cut down for construction – Minister Imran said that this amount has been paid off in March. He also added that the Environment Impact Statement (EIS) was completed this April.

Addressing Minister Imran’s response – MP Raai alleged that upon being questioned at the request of Neykurendhoo residents, Minister Imran had been lied whilst responding to the questions posed to him today.

“I am telling this to Neykurendhoo residents – that he had blatantly lied today as well. Neykurendhoo Council has told me today itself that subsequent to being unable to pay the compensation monies for the plans, the payments have been ceased,” he detailed.

MP Raai further alleged that physical works on Neykurendhoo Prison were being delayed due to Minister Imran and the President’s Office’s Chief of Staff Ali Zahir.

“The question I asked today was the details of the project which has been allocated a large amount of money from the state budget. But he had refused to answer. He also said that he did not care when the project was downsized to MVR 100,000 from MVR 17.4 million,” he added.

The government has been dwelling on plans to construct a prison at HDh. Neykurendhoo for over 15 years. In this regard, Neykurendhoo Prison was included in this year’s state budget.