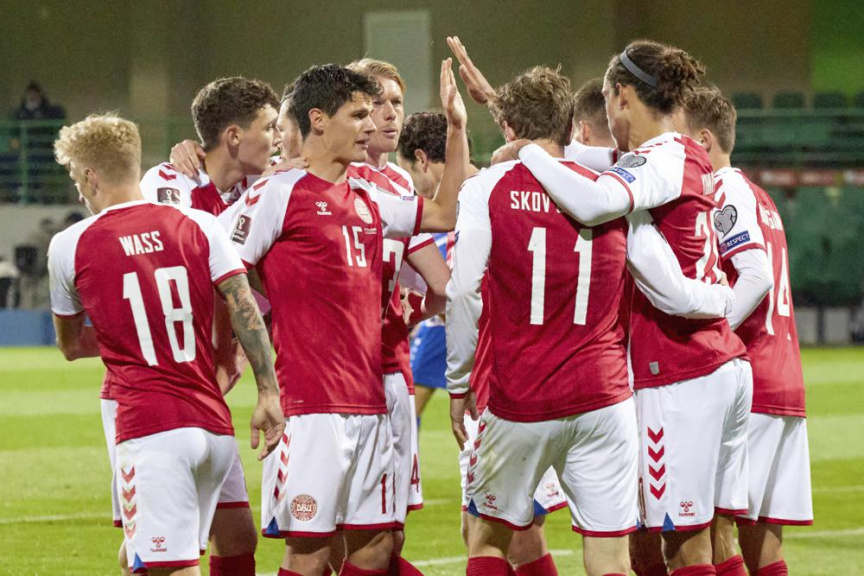 GENEVA (AP) — Denmark added to the most perfect campaign in World Cup qualifying on Saturday and England also eased toward winning its group.

Wins for Scotland, Serbia, Sweden, Switzerland and Ukraine moved each closer to at least a place in the playoffs next year with the finals tournament in Qatar in sight.

Cristiano Ronaldo did not even play in Saturday’s World Cup program yet still set one men’s international soccer record and extended another playing against the 2022 tournament host.

In his European record 181st game for Portugal — breaking a tie with his former Real Madrid teammate Sergio Ramos’s mark for Spain — Ronaldo score his 112th goal to stretch his men’s world record.

Here’s a look at the action from six of the 10 European qualifying groups in action Saturday.

Denmark has put together perhaps the world’s best series of qualifying results as the runaway group leader while Scotland and Israel served up the most dramatic game Saturday.

The Danes’ 4-0 win at Moldova was a seventh straight win with no goals conceded and a European-best 26 goals scored.

One day after he made the Ballon d’Or nomination list, defender and captain Simon Kjær’s goal from the penalty spot was one of four in 21 first-half minutes in Chișinău.

Denmark can seal its place in Qatar by beating Austria on Tuesday in Copenhagen.

Scotland beat visiting Israel 3-2 in a tense game with control of second place in the group — and a playoffs berth in March — at stake.

Scotland twice trailed, had a first-half penalty saved, leveled in the second half only after a lengthy video review overturned a goal previously disallowed, then missed a clear chance in the 89th.

Four minutes into stoppage time, Scott McTominay of Manchester United bundled the ball over the goal-line after a corner to delight a sold-out Hampden Park.

Scotland next plays Tuesday at the Faeroe Islands which lost 2-0 Saturday to visitors Austria. Though Austria stayed in fourth place, it will likely advance to the 12-team playoffs getting one of the two places awarded to teams based on Nations League group standings last year.

England cruised to yet another rout, 5-0 at Andorra, though is still only four points clear of surprise second-place Albania.

Five different players scored against the 156th-ranked Andorrans: Ben Chilwell and Bukayo Saka in the first half and Tammy Abraham, James Ward-Prowse and Jack Grealish in the second.

The match was handled by an all-woman team of match officials, led by Ukrainian referee Kateryna Monzul, one day after a fire damaged one of the stands at the tiny Estadi Nacional.

Hungary was impressive at the European Championship in June though lost again at home, 1-0 to Albania, in an empty Puskas Stadium in Budapest. It was a punishment for racist behavior by fans when England visited last month.

Poland had a crowd of more than 56,000 in the national stadium in Warsaw to see a 5-0 win over San Marino, and travels to face Albania on Tuesday.

While Italy is hosting the Nations League Finals this week, Switzerland closed the gap to three points beating Northern Ireland 2-0.

The Irish came to Geneva with hopes of putting pressure on the Swiss but the game swung against them when defender Jamal Lewis was sent off in the 37th.

Switzerland can draw level with Italy on Tuesday by winning in Lithuania, and needs a big win.

The key game is Nov. 12 when Italy hosts Switzerland. A draw could even suit the Italians whose goal difference is currently six better than the Swiss who missed many scoring chances Saturday.

Serbia edged into top spot winning 1-0 in Luxembourg to go one point clear of Portugal having played a game more.

Ireland won 3-0 at Azerbaijan, and in a five-nation group where the odd team out plays Qatar in a friendly, Portugal took its turn. Cristiano Ronaldo opened the scoring in the first half of a 3-0 win.

The likely group decider will be Portugal hosting Serbia on Nov. 14.

The Real Sociedad striker collected a pass on the left wing, put the ball through the legs of a challenger, then shot into the top corner from 25 meters (yards).

Spain hosts Sweden in the last round on Nov. 14.

In the group led by France, Ukraine took control of second place with a first win, 2-1 at Finland, after five straight draws.

Bosnia-Herzegovina stayed in contention with a first competitive win since November 2019, 2-0 at Kazakhstan.