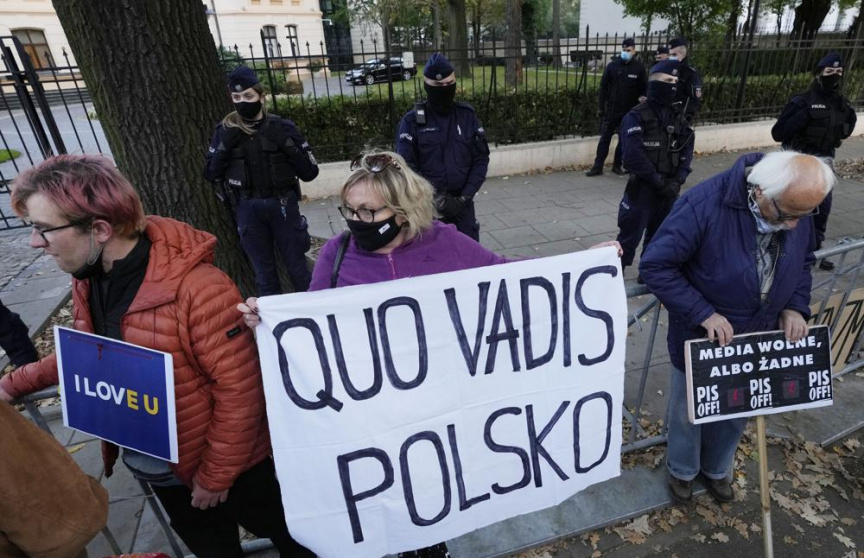 BRUSSELS (AP) — Senior officials from two founding members of the European Union expressed fears Friday that a Polish ruling challenging the supremacy of EU laws could trigger the country’s exit from the 27-nation bloc.

France’s Europe minister, Clement Beaune, insisted that Thursday’s ruling from Poland’s Constitutional Tribunal was an attack against the EU, while Luxembourg Minister of Foreign and European Affairs Jean Asselborn said Poland was “playing with fire.”

They spoke a day after the tribunal ruled that Polish laws take precedence over those of the 27-nation bloc, which Poland joined in 2004. The ruling further escalated lingering tensions over democratic standards between the country’s right-wing nationalist government and Brussels institutions.

The tribunal majority ruling — in response to a case brought by Prime Minister Mateusz Morawiecki — said Poland’s EU membership did not give the European Court of Justice supreme legal authority and did not mean that Poland had shifted its legal sovereignty to the EU.

The head of the EU’s executive branch, European Commission President Ursula von der Leyen, said she was “deeply concerned” by the ruling and pledged a swift analysis of its meaning before the EU acts. She also hinted at possible business disruptions with Poland.

“Our utmost priority is to ensure that the rights of Polish citizens are protected and that Polish citizens enjoy the benefits granted by membership of the European Union, just like all citizens of our Union,” von der Leyen said. “Moreover, EU citizens, as well as companies doing business in Poland, need the legal certainty that EU rules, including rulings of the European Court of Justice, are fully applied in Poland.”

Beaune called the ruling “extremely serious” and “part of a long list of provocations toward the European Union.” He told French broadcaster BFMTV that Poland has an obligation to respect its commitment to the EU.

“When you sign a contract with someone and you say ‘My own rule, which I define when I want and how I want, is worth more than what I signed with you,’ then there is no more contract. No more participation. So it is very serious, because there is a risk of a de facto exit,” he said.

Poland’s prime minister asked for the review after the European Court of Justice ruled in March that Poland’s new regulations for appointing judges to the Supreme Court could violate EU law. The ruling obliged Poland’s government to discontinue the rules that gave politicians influence over judicial appointments. To date, Poland has not done so.

Beaune said he does not want Poland to leave, echoing a sentiment largely shared in Brussels and in Poland, where Morawiecki recently called a potential “Polexit” fake news. Some 80% of Poles support EU membership.

“You know that in Poland, the people are European, and that they want to stay European,” Luxembourg’s Asselborn said. “But it must be said quite clearly that this government in Poland is playing with fire. That means that at a certain moment there can be a break, not only legally, but also politically.”

Poland’s Senate adopted a resolution Friday stating that the upper house of parliament will “stand guard to the national interests which reside in Poland’s continued presence in the European Union.”

The resolution says it’s the tribunal’s ruling that conflicts with Poland’s Constitution and expresses concerns that an opinion handed down from a court “that is controlled by the ruling party is a legislative prelude to leading Poland out of” the EU.

As guardian of the EU treaties, the EU’s executive commission reaffirmed after the ruling that EU law has primacy over national law, including constitutional provisions, and pledged to “make use of its powers to safeguard the uniform application and integrity of Union law.”

Last month, the European Commission asked the European Court of Justice to impose daily fines on Poland until it improves the functioning of the Polish Supreme Court and suspends new laws that were deemed to undermine judicial independence.

Depending on how the Polish government decides to use the latest ruling, the commission has further financial options at its disposal to try to make Warsaw comply with EU law, notably by continuing to hold up the country’s access to billions of euros in European money to help revive its economy in the wake of the coronavirus pandemic.

The commission could also activate a mechanism allowing the suspension of payments of EU money to a member country suspected of not adhering to the bloc’s standards.

German Foreign Minister Heiko Maas told Germany’s Funke newspaper group that “the European Commission has our full support for its task of enforcing European law everywhere in the EU.”