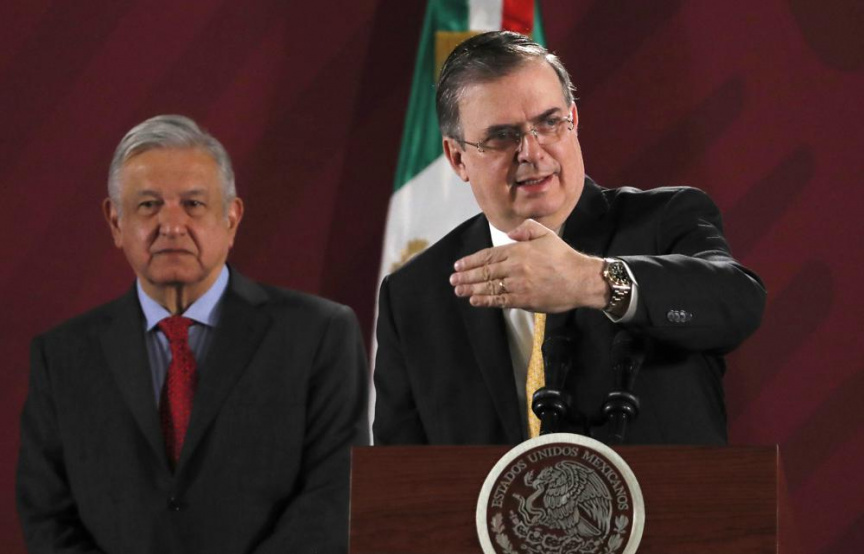 MEXICO CITY (AP) — Officials from Mexico and the United States are developing a new framework for their governments’ security relationship that is more “holistic” in addressing crime and will tackle a broader range of issues than the previous initiative.

Cabinet secretaries from both countries were scheduled to meet in Mexico City Friday to advance what they are calling the U.S.-Mexico Bicentennial Framework for Security, Public Health and Safe Communities.

The framing of the talks appears to reflect recent calls by Mexico President Andrés Manuel López Obrador and Foreign Affairs Secretary Marcelo Ebrard to bring to an end the Merida Initiative, which governed much of the neighbors’ security relationship during the past 13 years.

López Obrador said Thursday his government would continue to press the United States to increase investment in poor countries during the meetings.

For months, López Obrador has used every opportunity to press the U.S. to address the root causes of migration, especially from Central America. It is a priority shared by the Biden administration with Vice President Kamala Harris in charge of exploring what the U.S. could do.

“The immigration phenomenon, the immigration problem has to be addressed by creating opportunities for work, well-being in the places where the migrants originate so that before they leave those towns and abandon their families, risking it all, they have the option to work and be happy where they were born, where their people are, where their cultures are,” López Obrador said. “That is our focus.”

A senior U.S. administration official speaking on the condition of anonymity said Thursday migrant smuggling will be one of the areas both government will collaborate and take steps to address the criminal activity.

“One of the key components of this security framework is actually to address human trafficking and smuggling, which is a crime that victimizes the most vulnerable and something neither government wants to let stand,” the official said.

“Our high-level security dialogue is modernizing our security framework. It’s making it much more holistic to confront the existing and new challenges and it’s enhancing our cooperation with Mexico on the priorities that both nations share,” said another senior administration official, also speaking on condition of anonymity.

Last month, attention focused on some 15,000 mostly Haitian migrants who camped beside a border bridge between Mexico and Texas. It took a week for U.S. authorities to move them all and about half have already been flown back to Haiti. Mexico flew 129 Haitians back to their country Wednesday, though it was not clear if any of them had been among that group at the border.

The two sides are also likely to discuss how the U.S. government can comply with a Supreme Court order to re-instate the controversial Trump-era policy that made asylum seekers wait out their cases in Mexico. Under the so-called Migrant Protection Protocols, tens of thousands of asylum seekers waited in dangerous Mexican border cities for their cases to advance. Biden had made cancelling the policy one of his first orders of business upon taking office.

During a visit to Paris Wednesday, Blinken stressed that the meetings in Mexico would cover a wide range of issues. “We’ve got a very broad-ranging agenda, and I think it’s evidence of the fact that the relationship, while some issues like migration understandably get a lot of headlines, is incredibly broad and deep-rooted, and so I think we’ll be covering a lot of ground,” Blinken said.

Earlier in the week, Ebrard had said as much. He said Mexico would push the U.S. to do more to stem the flow of illegal guns into Mexico and to speed extraditions requested by Mexican prosecutors.

Another U.S. senior administration official said Thursday that the new framework would make clear the commitment of both countries, but especially the United States, to work on arms entering Mexico.

Mexico continues to suffer high levels of violence and disappearances related to organized crime, which controls parts of the country. But López Obrador and Ebrard have said the Merida Initiative, which aimed to increase Mexico’s crime-fighting capabilities, is a relic of the past drug war and that the security agreements between the two countries need to move in a new direction.

Mexico is also desperate to reopen border crossings with the United States. Traffic has been limited to essential business throughout much of the pandemic.

The security talks come just weeks after delegations from both countries met in Washington for meetings on economic matters. Blinken had gushed over the quality of those meetings and said he expected similarly positive dialogue on security issues.