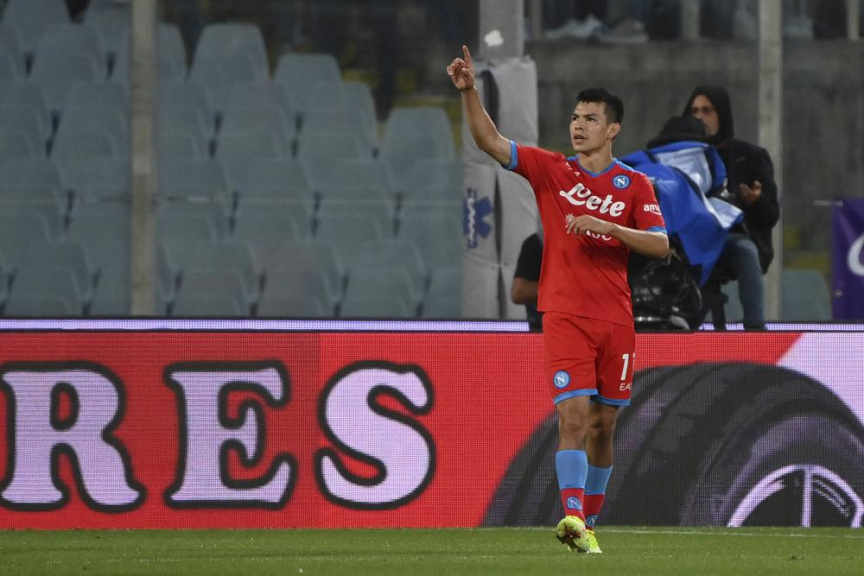 Napoli's Hirving Lozano celebrates after scoring his side's opening goal during the Serie A soccer match between Fiorentina and Napoli, at the Florence Artemio Franchi stadium, Italy, Sunday, Oct. 3, 2021. (Alfredo Falcone/LaPresse via AP)

MILAN (AP) — Napoli bounced back from its first loss of the season to maintain its perfect start to the Serie A campaign.

Luciano Spalletti’s side rallied to win 2-1 at Fiorentina on Sunday, with Hirving Lozano and Amir Rrahmani scoring after Lucas Martínez Quarta had given the home side the lead.

Napoli has won its first seven league matches of the season and tops the Serie A table. It is two points above AC Milan, which won 3-2 at Atalanta.

“We deserved to win, but we weren’t as good as on other occasions,” Spalletti said. “We didn’t do as well as we can today, we’re certainly capable of better. We were sub-par at points.

“We improved over the course of the game, feeding our forwards with better passes, but we underperformed, especially at the start of the match.”

Despite its domestic form, Napoli has struggled in Europe. It drew at Leicester in their Europa League opener and lost 3-2 at home to Spartak Moscow on Thursday.

Napoli was looking to recover from that defeat but went behind in the 28th minute as a corner was knocked back across goal by Dušan Vlahović and Martínez Quarta acrobatically volleyed it into the back of the net.

Martínez Quarta swiftly went from hero to villain as he bundled over Victor Osimhen as the Napoli forward ran into the area.

Fiorentina goalkeeper Bartłomiej Drągowski did brilliantly to parry Lorenzo Insigne’s penalty and then get up and push the rebound away from the onrushing Napoli captain but Lozano fired in the loose ball.

Osimhen almost gave Napoli the lead in stunning fashion on the stroke of halftime but his overhead kick flew narrowly past the left post.

Napoli did go in front five minutes into the second half when Rrahmani headed a free kick into the bottom right corner.

Two late goals took the gloss off the scoreline but Milan put out a real statement of intent in Bergamo despite an injury crisis.

The players Milan was missing through injury included Zlatan Ibrahimović, who marked his 40th birthday by getting a gold-colored Ferrari. The occasion was also celebrated at the club’s training ground with players and staff in the morning.

Milan got off to the best possible start at the home of one of its main rivals as it took the lead after 28 seconds.

Both sides had a number of chances in an entertaining match, which was played at a frantic pace.

Milan all but secured a valuable win when Rafael Leão added a third with 12 minutes remaining, following another assist by Hernández, although it turned out to be a nervy finale for the Rossoneri.

Duván Zapata converted a penalty four minutes from time after a handball by substitute Junior Messias, shortly after coming on for his Milan debut. And Mario Pašalić netted in stoppage time as Atalanta threatened an incredible comeback.

Musa Barrow scored one and created the other two goals as struggling Bologna surprised Lazio 3-0.

Lazio was brimming with confidence after beating fierce rival Roma in the capital derby, while Bologna had lost two of its past three matches, conceding 12 goals.

But Barrow fired Bologna in front in the 14th minute with a spectacular solo effort and then curled in a corner for Arthur Theate to head in the second, three minutes later.

Bologna all but guaranteed the win in the 68th when Barrow found Aaron Hickey, who cut inside and fired in a shot which squirmed under the body of Lazio goalkeeper Pepe Reina.

Lazio’s misery was completed eight minutes later when defender Francesco Acerbi was booked for a foul and received a second yellow for his subsequent protests.

Bologna moved up to ninth, level on points with Lazio, Juventus and Atalanta.

Lorenzo Pellegrini marked his new contract by helping Roma to a 2-0 win over Empoli.

Henrikh Mkhitaryan set up the opener for Pellegrini three minutes from halftime and got on the scoresheet himself three minutes after the break, when he fired in the rebound after Tammy Abraham’s effort came off the crossbar.