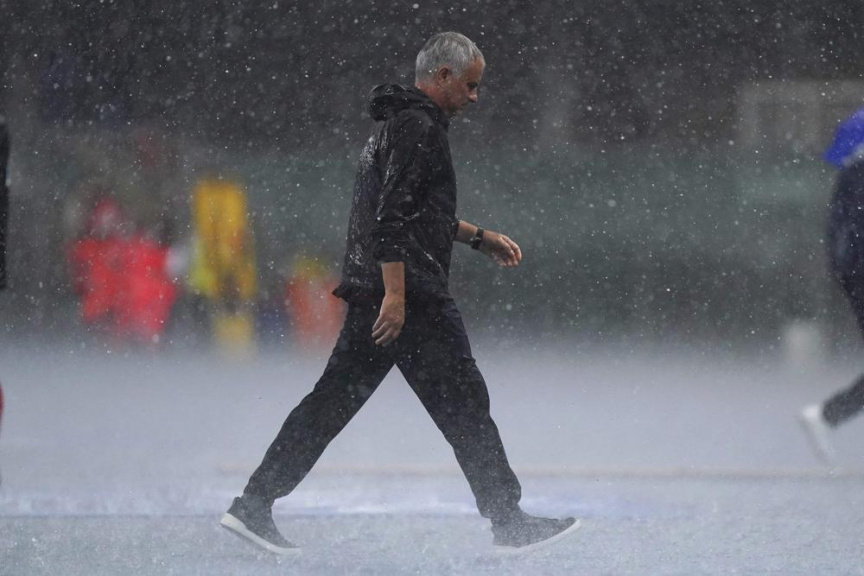 MILAN (AP) — José Mourinho had his first defeat as Roma coach when his side surprisingly lost 3-2 at Hellas Verona in Serie A on Sunday, while Juventus continues to look for its first win after a 1-1 draw against AC Milan.

Lorenzo Pellegrini gave Roma the lead in rainy Verona but the hosts turned the match around in the second half with three goals in 14 minutes.

It was the first points of the season for Verona, which replaced Eusebio Di Francesco with Igor Tudor as coach on Tuesday after losing three straight.

Milan lost its perfect record after drawing at Juventus.

Milan moved level on points at the top with defending champion Inter Milan, one point above Roma. Napoli can take a two-point lead in the league if it wins at Udinese on Monday.

Mourinho had won his three league games in charge of Roma as well as three matches in the European Conference League.

“I’m always a bit preoccupied before games. It’s how I experience them. I’m always focused, that’s how I am,” Mourinho said. “I knew that they had some attributes that make them difficult to play against. Even before they changed coaches they caused other teams a lot of problems, and they could have got some different results.

“Then, when you change the coach, there is pretty often a strong reaction. And we knew that ... They really dug deep to get a positive result. But we dug deep as well — I don’t have anything bad to say about that, about our attitude and our desire to get a result. But we didn’t play well.”

And Roma looked to be heading to another victory after Pellegrini scored the opener in the 36th minute with a stunning backheel flick on the volley after a cross had been deflected into his path.

It was Pellegrini’s fifth goal in four matches.

However, Antonín Barák leveled four minutes after the break and Gianluca Caprari put the hosts ahead five minutes later.

Verona midfielder Ivan Ilić turned the ball into his own net to gift Roma the equalizer but Davide Faraoni restored the home side’s lead in the 63rd with a stunning effort from the edge of the area that went in off the underside of the crossbar.

Milan was looking to move clear at the top of the league after winning its first three matches, only conceding one goal, while Juventus — which had just one point entering the game — was desperate for a first league victory in Massimiliano Allegri’s return as coach.

The Bianconeri took the lead in the fourth minute as they counterattacked following Milan’s corner. Paulo Dybala threaded the ball through to Álvaro Morata, who sprinted forward from his own half before lifting the ball over onrushing goalkeeper Mike Maignan.

Milan leveled in the 76th when Ante Rebić headed in Sandro Tonali’s corner.

Cagliari also changed its coach midweek as Walter Mazzarri replaced Leonardo Semplici and he started his time on the Sardinian team’s bench with a 2-2 draw at Lazio.

Cagliari was on course to win the match but Danilo Cataldi leveled seven minutes from time. Cagliari defender Gabriele Zappa was sent off in stoppage time for a second yellow card.

Newly promoted Venezia lost 2-1 to Spezia after a stoppage-time goal.