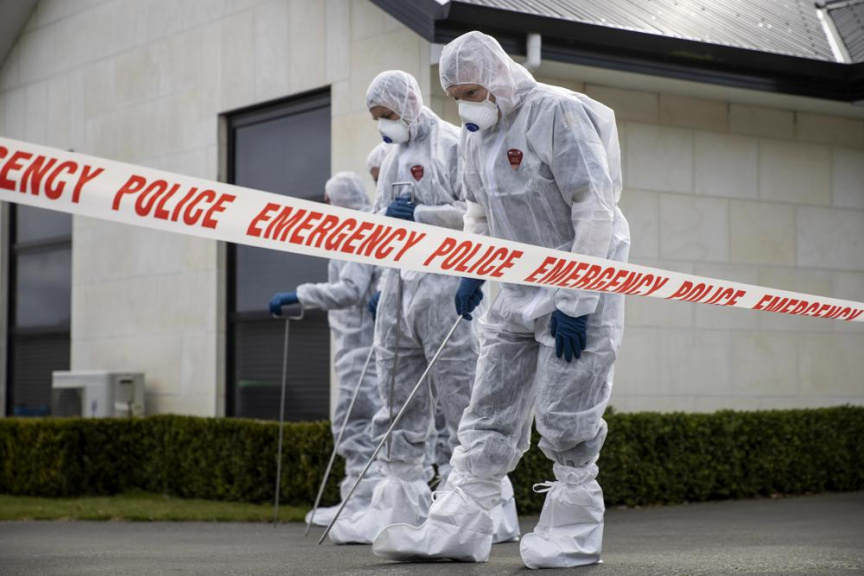 Police search the driveway of a house where three children were found dead in the South Island town of Timaru, New Zealand, Friday, Sept. 17, 2021. (George Heard/New Zealand Herald via AP)

Police said they were not looking for any possible suspects beyond those involved in the incident late Thursday at a home in the South Island town of Timaru. They said emergency services had found a woman at the address who had been hospitalized in stable condition.

Police said the children were 3-year-old twins and a 7-year-old who were all siblings. All those involved had recently moved from South Africa to New Zealand, police said, and had moved out of a mandatory coronavirus quarantine facility within the past week.

In a brief news conference, police said the investigation was in its early stages and they couldn’t yet release many details, including the names of the children or how they died.

Inspector Dave Gaskin, the Aoraki area commander, said the deaths would be “incredibly distressing” for residents of Timaru, particularly after five teenagers from the town were killed in a car crash last month.

The Stuff news organization said neighbors Karen and Brad Cowper called police just after 10 p.m. when they heard a man screaming and crying. The neighbors said they asked the man if he was OK but he didn’t respond other than to say: “Is this really happening?”

Stuff reported the family was living in accommodation for hospital staff, and both the man and woman were medical professionals.