Yameen cautioned over violating the terms of his house arrest 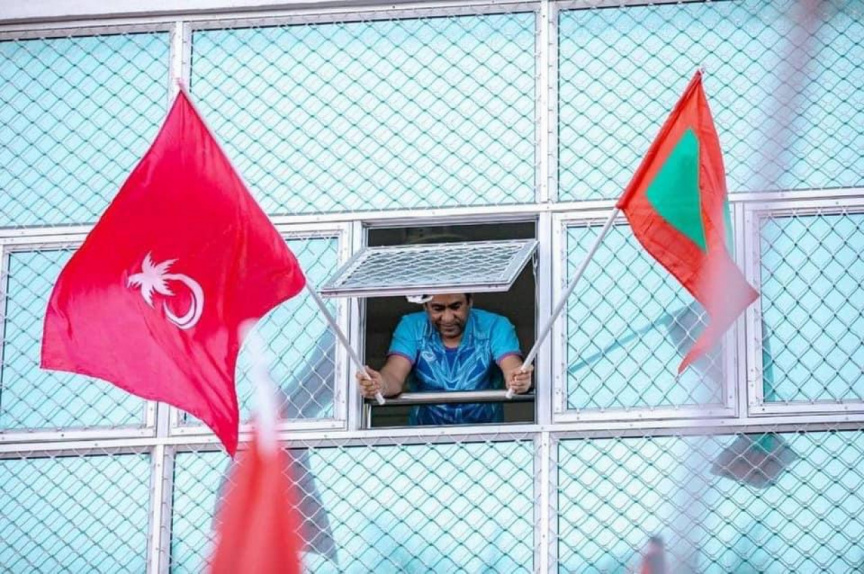 Maldives Correctional Service (MCS) has revealed that former President Yameen Abdul Gayyoom has been cautioned over the violation of the terms of his house arrest.

A media official from Corrections told Sun that Yameen was cautioned under the first amendment to the Jails and Parole Act – for violating the article on political parties, organizations and participating in activities related to such entities.

The section states that apart from being a general member of a political party or an organization – a person who is serving a jail sentence will not be able to represent such an entity nor take part in any activities organized by such an entity.

Last Friday, Yameen had taken part in a PPM protest which took place in Male’ City – from his home. He stood near an open window of his home where the protesters could see him and waved at them. Then Yameen shook hands with some of the protesters – and the protesters had given him two flags; PPM’s and the national flag – which he continued to wave from his window.

Following this, Commissioner of Prisons Ahmed Mohamed Fulhu posted a tweet stating that Yameen had violated the terms of his house arrest by taking part in the protest – adding that action will be taken against him for the violation.

The media official from Corrections said that Yameen was cautioned for taking part in the protest held by PPM on Friday – and was advised not to repeat such a thing. It was not disclosed as to what action would be taken against Yameen in a scenario where he is once again in violation of the terms of his house arrest.

First amendment to the Jails and Parole Act was given ratification by Yameen himself – during his administration.