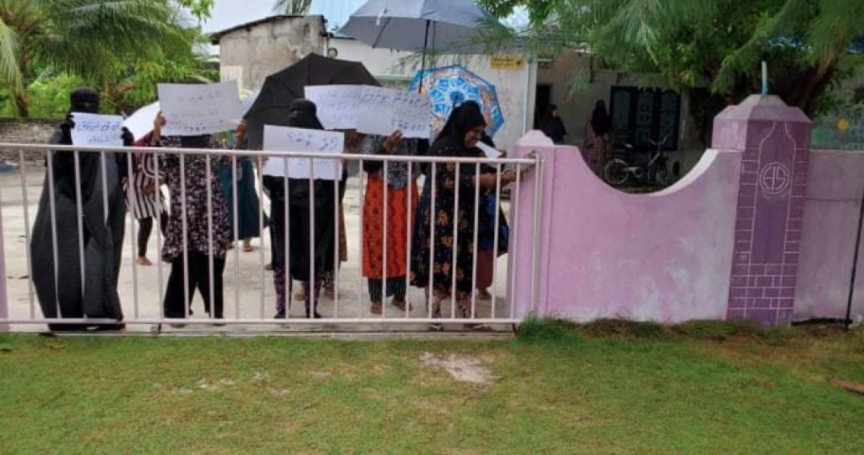 Parents of the students from Th. Hirilandhoo School has locked the school gate today in protest.

Hirilandhoo Council President Mohamed Jalaal had told Sun that the parents had locked the school gate and were protesting infront of it – to express their anger over the failure to address the difficulties faced by the school as well as the obstruction to carry on with classes when there is heavy rain.

Jalaal further detailed that the parents had sent their children to school this morning initially – however, did not send their children back to school after the interval period and had begun protesting in front of the school gate. The Council was informed of the protest at around 9:30 this morning. Shortly afterward, the parents had put a lock on the gate – subsequently locking it.

Accordingly, Jalaal noted that amidst the extreme weather being experienced today – water had leaked inside classrooms due to heavy rain, soaking the desks used by the students.

“The concerns being raised are mainly in relation to the condition of the school building. When there is heavy rain – it is extremely difficult to continue classes. A large number of classes are being conducted in an old building. Water leaks inside classrooms when there is heavy rain. If it becomes too windy – it is enough to blow the papers being used inside classrooms as well because of how exposed they are,” he had said.

Another significant concern raised by the parents according to Jalaal is the fact that there were only four restrooms in the school to be used by everyone – at a school where an estimated total of 240 students studies.

Speaking further, Jalaal pointed that no government has ever worked to ease the difficulties faced at Hirilandhoo School – despite renovations of the school being included in the state budget every year.

He also noted that difficulties faced at schools that are in better condition than Hirilandhoo School – have been budgeted and attended to instead.

Jalaal also said that the difficulties faced at Hiralandhoo School have been brought to the attention of the relevant government authorities on multiple occasions.

When the Education Ministry was asked for a comment on the matter – they said that they have been informed of the protest at Hirlandhoo School, adding that the Ministry has requested the school to brief them more on the situation.