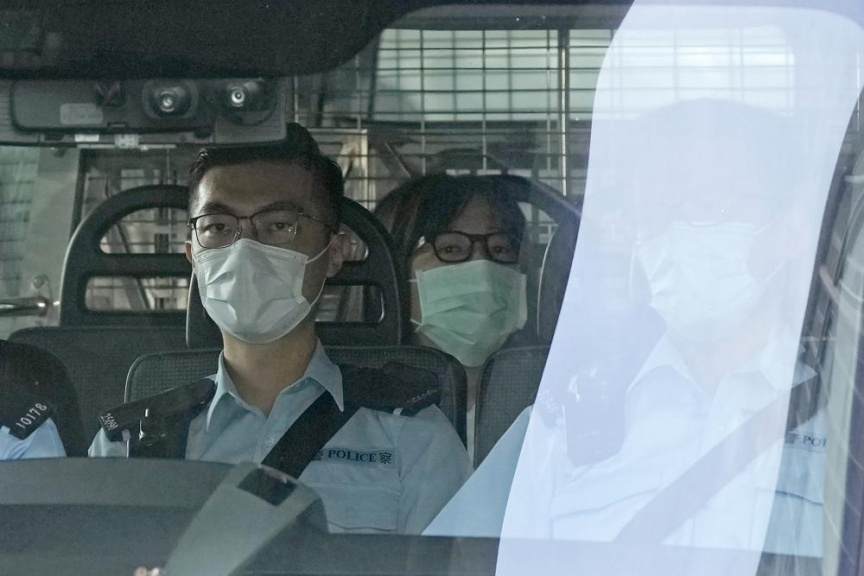 Chow Han Tung, vice chairwoman of the Hong Kong Alliance in Support of Patriotic Democratic Movements of China, center, is escorted by police in a van to a court, in Hong Kong, Friday, Sept. 10, 2021. (AP Photo/Kin Cheung)

HONG KONG (AP) — Three leaders of the the group that organized an annual Tiananmen candlelight vigil were being held in custody Friday after they were charged with subversion under Hong Kong’s national security law, as authorities intensify a crackdown on dissent in the city.

The Hong Kong Alliance in Support of Patriotic Democratic Movements of China’s chairman Lee Cheuk-yan, as well as vice-chairs Albert Ho and Chow Hang-tung were charged with inciting subversion of state power under the national security law. The alliance itself was also charged with subversion.

Chow was denied bail, days after she was arrested for failing to comply with a police request for information. Lee and Ho are currently serving jail sentences for their roles in unauthorized assemblies in 2019. The next court hearing for the case is scheduled for Oct. 28.

For the past 30 years, the alliance organized the candlelight vigil that saw tens of thousands of people mass in the city’s Victoria Park to commemorate China’s bloody military crackdown against pro-democracy demonstrations in Beijing’s Tiananmen Square on June 4, 1989.

It was the only large-scale public commemoration of the crackdown on Chinese soil, featuring crowds of people lighting candles and singing songs to support democracy.

Police have banned the vigils for the past two years citing the coronavirus pandemic, although critics believe the ban is part of the crackdown on dissent Beijing and Hong Kong’s leaders have waged following months of anti-government protests in the territory in 2019.

Authorities have now characterized the Hong Kong Alliance in Support of Patriotic Democratic Movements of China as a foreign agent, and sought details about the group’s operations and finances in connection with its alleged activities and links with democracy groups overseas.

Chow and four other leading members of the alliance had refused to cooperate with the police request for information, and were arrested this week for failing to comply.

Police on Thursday confiscated computers, documents and promotional materials from the closed June 4 museum, which was run by the alliance to commemorate the Tiananmen crackdown.

Police said 2.2 million Hong Kong dollars ($280,000) worth of assets belonging to the alliance were also frozen.

“Maybe the other party will crush the ‘obstacle’ that is us, but resistance is about gathering strength in exchange for some time and space, to allow more ‘obstacles’ the opportunity to grow,” the post said.

“As long as we still have the will to fight, we have not lost.”

Over the past year, dozens of pro-democracy activists have been arrested, others have left the city for exile abroad, and the city has amended electoral laws to increase the number of seats for pro-Beijing legislators while reducing those that are directly elected.

The national security law, imposed by Beijing on the city in June last year, criminalizes subversion, secession, terrorism and foreign collusion to interfere in the city’s affairs.

Critics say the national security law, which has been used to arrest more than 100 people, rolls back freedoms promised to the former British colony when it was handed over to China in 1997. Hong Kong had been promised it could maintain freedoms not found on the mainland for 50 years, such as freedom of speech and assembly.

Pakistan urges to help Afghan based on past mistakes