Uruguay wins, Colombia draws in troubled round of qualifiers 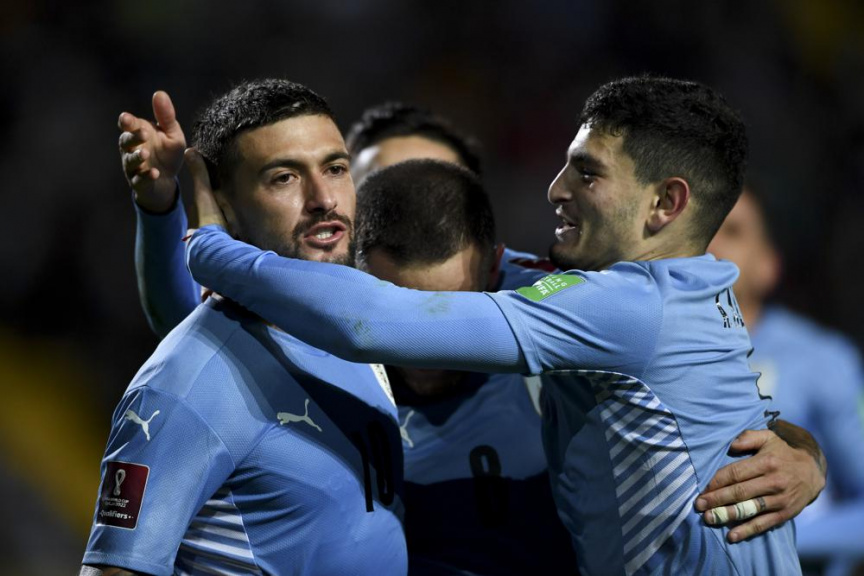 SAO PAULO (AP) — On a day overshadowed by the shocking suspension of the superclasico between Brazil and Argentina because of breaches of COVID-19 restrictions, Uruguay and Colombia added key points in South American qualifying for the World Cup.

The Uruguayans thrashed Bolivia 4-2 at home to move into fourth place with 12 points after eight matches. Colombia had a 1-1 draw at Paraguay. It was Colombia’s third consecutive draw, but enough for Reinaldo Rueda’s lineup to stop Paraguay moving into fifth spot in the standings.

The top four teams in South American qualifiers get direct spots at next year’s World Cup in Qatar, and the fifth-place team will go into an intercontinental playoff.

FIFA will decide the future of the qualifier between competition-leading Brazil and second-place Argentina. Their match was stopped after 7 minutes with a 0-0 score when local health authorities walked onto the field in a bid to remove three England-based Argentina players who they believe should have been in quarantine rather than playing in Sao Paulo.

Brazil leads the pack with 21 points from seven matches, followed by Argentina with 15.

Uruguay’s veteran strike duo of Edinson Cavani and Luis Suárez was out for the encounter, but Óscar Tabárez’s team had little trouble against a weak Bolivia lineup.

Giorgian de Arrascaeta opened the scoring in the 17th minute from close range. Federico Valverde doubled the lead in the 31st with a free kick from the left edge of the box and Agustin Alvares added a third, his first for the national team, in the 47th.

Bolivia responded with a goal by Marcelo Martins in the 59th after a mistake by the Uruguayan defense. But Uruguay scored again eight minutes later from the spot.

Martins reduced the margin with a penalty in the 84th.

Cavani missed the match because of travel restrictions imposed by Manchester United, and Suárez was injured.

“Little by little the result came,” Tabárez said. “We didn’t suffer at the end, but they improved. Now we are better positioned on the table.”

Uruguay’s next match is against third place Ecuador in Montevideo on Thursday. Bolivia will next play in Argentina.

Colombia entered the game determined to improve on its poor performance in a 1-1 draw at Bolivia, but Paraguay opened the scoring in the 40th minute.

Colombia rallied in the second half and put Juan Guillermo Cuadrado on the spot in the 53rd after a handball awarded by the video referee. The Colombians had more possession late in the game but weren’t able to convert that into goals.

He said defender Sanchez is expected to leave before Thursday’s match against Chile in Barranquilla, but he hopes Serie A players Cuadrado and David Ospina can stay.

Also on Sunday, Ecuador was held to a 0-0 draw by Chile. The Ecuadorians, who saw Junior Sornoza sent off in the 63rd minute, now have 13 points, two behind Argentina. Chile is in eighth spot with seven points.

Peru beat Venezuela 1-0 with a goal by Christian Cueva in the 35th from the edge of the box. The chances of Venezuela rallying were thwarted three minutes later, when Tomás Rincón received a second yellow and left the match.

The Peruvians moved to seventh place with eight points, while Venezuela went to the bottom of the 10-team round-robin group with four.

Senegal and Morocco through to World Cup playoffs

Germany qualifies for World Cup with 4-0 win in Skopje