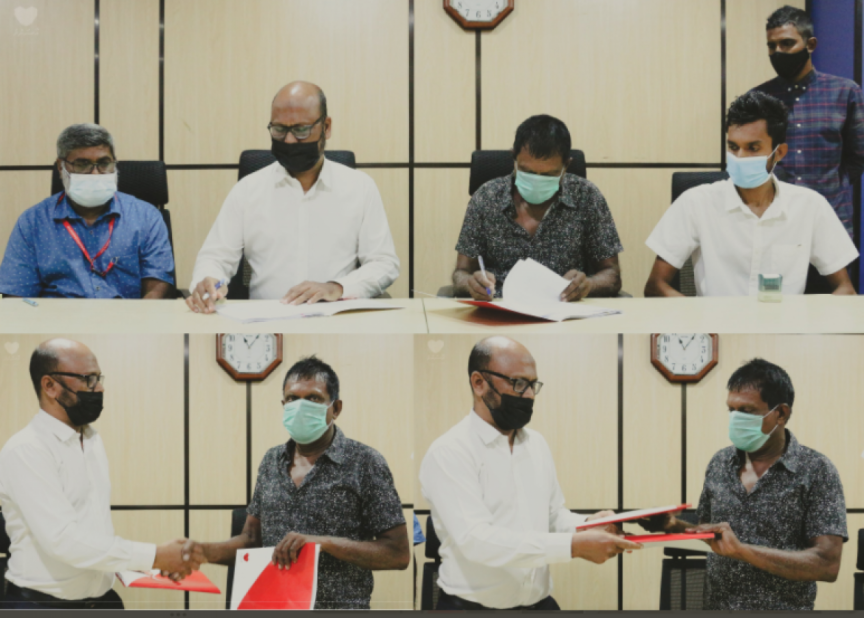 A capture from the signing ceremony held between Aasandha Company Limited and HMHI on September 2, 2021. (Photo/Aasandha)

Aasandha Company Limited had contracted HMHI – a private company operating speed boat services between Male’ City and the islands of Alifu Dhaalu Atoll – to act as a stand-in to transport sick patients via speedboat, during times in which the services of a sea ambulance are unavailable at Alifu Dhaalu Atoll.

Under the agreement pertaining to the project, HMHI will transport sick patients amongst the islands at Alifu Dhaalu Atoll – and also to Male’ City, via speedboat – for a period of one year.

Aasandha detailed HMHI will allocate a speedboat of their choice and capacity to carry out the transfer operations for sick patients – as a stand-in for when sea ambulances are unavailable. HMHI will commence the transfer of a patient within a specific amount of time from which their services are requested by Aasandha.

Addressing the decision to render such a service through a third party – Aasandha stated that the highest priority is to save the lives of sick patients by getting them the medical attention they need at the earliest.

In this regard, they noted that in cases where sea ambulances are unavailable – individuals turn to private parties for speedboat transfers. However, sometimes this results in delays which put the sick patient’s life at risk.

Hence, the service was commenced with such experiences in mind, as well as recommendations by the people – in order to facilitate a faster transfer of sick patients from one place to another.

Aasandha also noted that the service is being commenced in Alifu Dhaalu Atoll for a test run – during which they will closely monitor the changes it has on patient transfer in the atoll. If patient transfer services are enhanced – or becomes much faster than before – similar services will commence at other atolls.

Legal aid provided by State for mostly minors this year