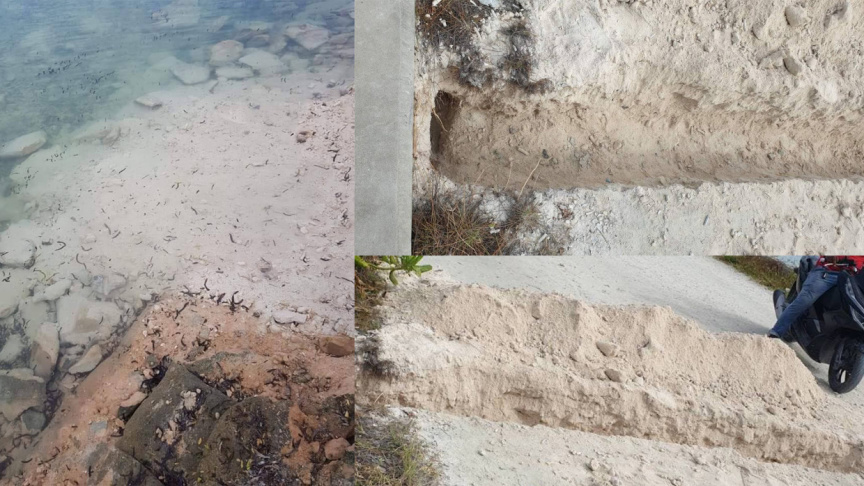 Madaveli-Hoadedhoo causeway from the area it has been cut off.

The causeway between the islands Madaveli and Hoadedhoo in Gaafu Dhaalu Atoll has been cut off beyond use for transportation - at a time which the islands councils are in disagreement over the matters which have recently come to light regarding the causeway.

This causeway connects the islands of Hoadedhdhoo and Madaveli, along with the uninhabited island of Haadhoo which lies in between. It has been cut off from the area which connects Hoadedhoo with the Haadhoo.

Madaveli Council President Fiyaz Hassan had told Sun that it is most likely that the causeway had been cut off in the early hours of today - whereas it was only brought to their attention this morning. He also noted that a case has been filed regarding the matter with the Police - and that the Police were investigating the matter further.

Fiyaz also highlighted that the cutting off the causeway will pose many difficulties to residents of both islands - but added that Hoadedhoo residents would be more in distress in comparison.

"It is better to not delve into the difficulties that will be posed consequent to the causeway being cut off," he had said.

Fiyaz also detailed Hoadedhoo Council had publicized a resolution last week - as a warning to the government stating the causeway will be cut off, citing that it was detrimental. He also said that Madaveli Council had issued a statement in response, condemning the said resolution.

"We are forecasting that the causeway will be completely diminished from Hoadedhoo side during high tides," he added.

Hoadedhoo Council President Hussain Waarish had told Sun that the Council also condemns the act of cutting off the causeway.

"Madaveli Council has stated to some media outlets that this was done so with Hoededhoo Council spearheading. We strongly condemn this," he had said.

He also gave full assurance that Hoadedhoo Council would not take part in such an act.

The causeway between the islands was constructed in 2016 - in a project valued at MVR 29 million. This was part of the government's budget. The causeway measures 440 meters in length and seven meters in width.

The causeway has also been cut off on an occasion prior to this in September 2018 - by Hoadedhoo residents. They had allegedly done this as waves were rising over the causeway and flooding the island.