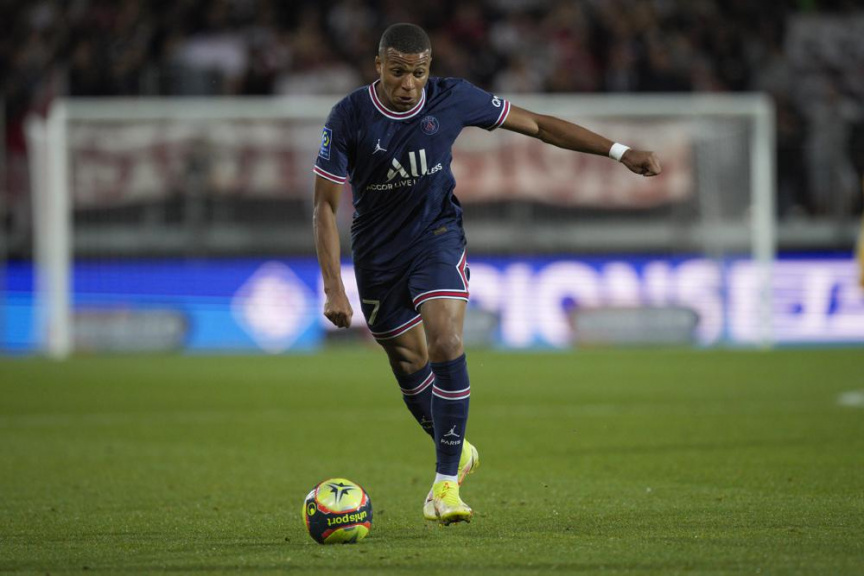 PSG's Kylian Mbappe runs with the ball during a French League One soccer match between Brest and PSG at the Francis-Le Ble stadium in Brest, France, Friday, Aug. 20, 2021. (AP Photo/Daniel Cole)

BREST, France (AP) — Paris Saint-Germain survived a scare on Friday without Neymar and Lionel Messi before beating Brest 4-2 and extending its winning start in the French league to three games.

Substitute Angel Di Maria sealed the victory on a counterattack in injury time just when it looked like Brest might score an equalizer to claim a point against the star-studded visitors.

Though Neymar and Messi weren’t ready for the game, PSG still had the likes of Kylian Mbappé, Achraf Hakimi and Netherlands midfielder Georginio Wijnaldum in its starting lineup.

Messi hasn’t played since joining from Barcelona on Aug. 10. The 34-year-old soccer great missed a month of training after leading Argentina to the Copa América title on July 10 and PSG coach Mauricio Pochettino evidently feels he needs more time to prepare for his French debut. Messi trained with the team last week but isn’t yet match fit.

Ander Herrera opened the scoring in the 23rd minute when Brest’s defense could only half-clear Mbappé’s cross. Herrera returned the ball from the edge of the penalty area with a volley that flew in off the left post.

Mbappé capitalized on some more poor defending to head the visitors’ second goal in the 36th.

But Franck Honorat pulled one back for Brest in the 42nd after Romain Faivre found him in space with his heel, and the home team pushed for an equalizer in the second half.

Brest forward Irvin Cardona should have scored shortly before Idrissa Gueye got the visitors’ third goal with a long-range effort inside the left post in the 72nd.

Steve Mounié set up a frenetic finale with Brest’s second goal in the 85th. Di Maria quashed the home fans’ hopes of a surprise result with his late goal.

Pochettino will be concerned about conceding two goals, however. PSG has now conceded five in three games for the first time since 2004. Marquinhos and new signing Sergio Ramos are both still working their way back to fitness.

Messi looks angry at being replaced