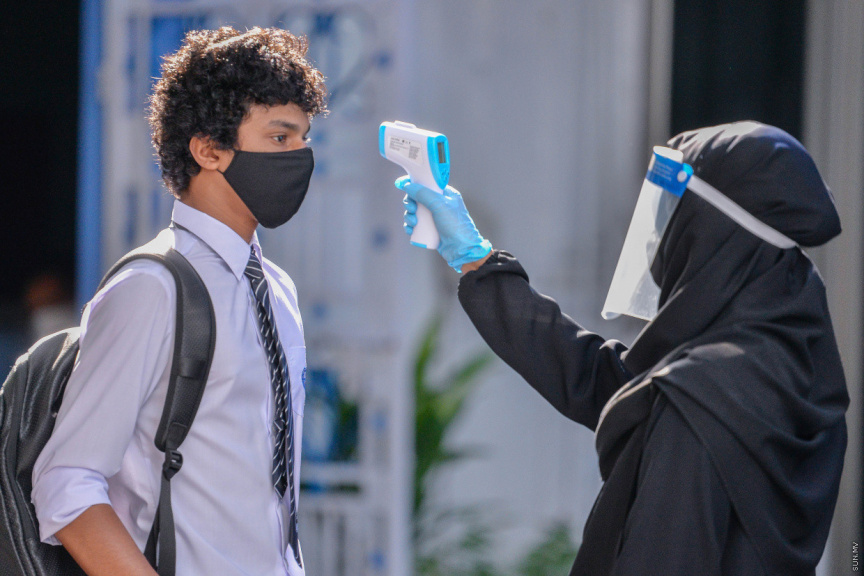 A student receives a temperature check at a school in Male' City on July 1, 2020. (Sun Photo/Fayaz Moosa)

A nationwide vaccination program aimed at inoculating school students across the country has commenced today.

Speaking a television program broadcasted by PSM last night, State Minister of Education Ministry Dr. Abdulla Rasheed stated that vaccination for students in Male’ City schools will be carried out at the Islamic Centre – whereas today will see the inoculation of Aminiya School students.

The vaccination center for students of Hulhumale’ City schools will be Rehendhi School – whereas today will see the inoculation of Huravee School students.

Education Ministry has also publicized the order in which vaccination for students in Male’ City schools will be carried out – subsequent to the completion of vaccination for Aminiya School students.

Speaking at the same program, State Minister of Education Ministry Ahmed Mujaahidh had also noted that the Ministry was working on establishing vaccination centers at both Thajudheen School and Imaduddin School.

Mujaahidh also noted that inoculation of school students across some atolls will also commence today – citing that vaccination for students at 10 islands in Kaafu Atoll will be carried out today.

Mujaahidh also noted that the parents have been informed of the locations at which vaccination will be carried out in these atolls – in addition to all other relevant information pertaining to the matter.

Speaking further, Rasheed noted that vaccination will be carried out by HPA officials or medically trained persons in Male' area. Vaccine will be administered to students at islands by the health center staff of the respective islands or trained medical officials.

School children will be administered the Pfizer vaccine; a shipment of 128,700 doses donated by the United States through the COVAX Facility.