Death toll triples to more than 300 in recent China flooding 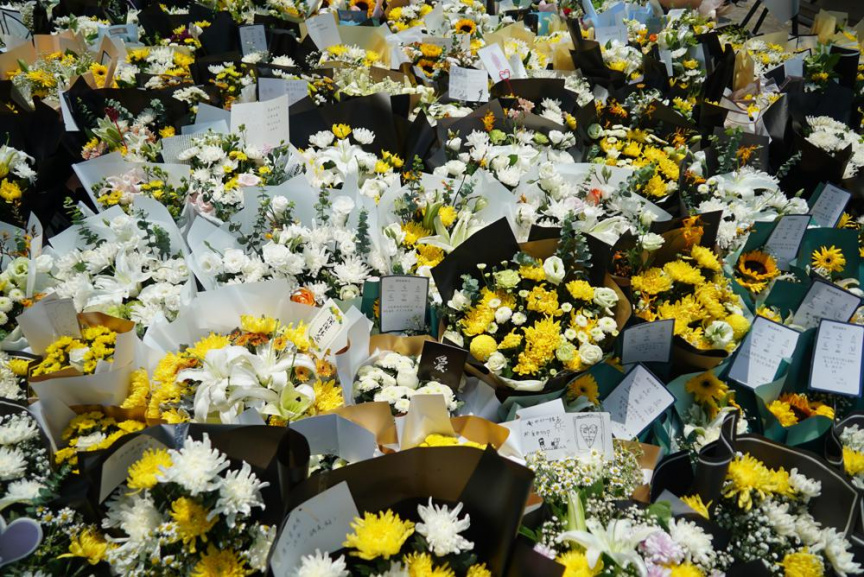 In this July 27, 2021, file photo, bouquets of flowers are placed outside the entrance to a subway station in Zhengzhou in central China's Henan Province, where numerous people died after a record-breaking downpour flooded the area. (AP Photo/Dake Kang, File)

The Henan provincial government said 302 people died and 50 remain missing. The vast majority of the victims were in Zhengzhou, the provincial capital, where 292 died and 47 are missing. Ten others died in three other cities, officials said at a news conference in Zhengzhou.

Record rainfall inundated the city on July 20, turning streets into rushing rivers and flooding at least part of a subway line. Video posted online showed vehicles being washed away and desperate people trapped in subway cars as the waters rose. Fourteen people died in the subway flooding.

Authorities said 189 people were killed by floods and mudslides, 54 in house collapses and 39 in underground areas such as basements and garages and including those on subway Line 5. The death toll remained at six in an expressway tunnel from which 247 vehicles were removed as it was drained.

Wang Kai, the governor of Henan province, expressed deep condolences to the victims and sympathies to the families on behalf of the Henan Communist Party committee.

The worst came after Zhengzhou was hit by 20 centimeters (8 inches) of rain in one hour starting at 4 p.m. on July 20, overwhelming the already drenched city. Children were trapped in schools, and stranded people stayed in their workplaces overnight.

The rains headed north in the following days, hitting the Henan cities of Hebi, Anyang and Xinxiang. Seven people died and three are missing in Xinxiang, where record rains dropped more than 25 centimeters (10 inches) of water in a 19-hour period. Henan is an inland county about 620 kilometers (380 miles) southwest of Beijing.

Authorities said that about 250,000 hectares (625,000 acres) of crops were destroyed and have estimated losses at more than 90 billion yuan ($14 billion). About 1.5 million people were evacuated because of the rains and flooding.

The central government has set up an investigation team to evaluate the disaster response, summarize the lessons from it and hold accountable anyone guilty of dereliction of duty, Chinese media said.

China seals city amid worst virus outbreak in a year