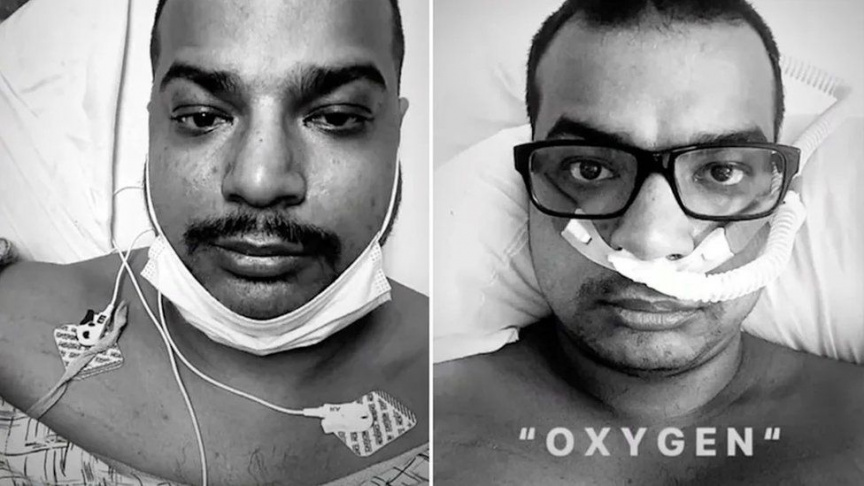 Stephen Harmon posted photos of himself in his hospital bed, wrote that he had pneumonia and critically low oxygen levels and was going to be intubated. (Photo/CBS)

LOS ANGELES (AP) — A man who mocked COVID-19 vaccinations died this week at a Los Angeles-area hospital after contracting the virus.

Stephen Harmon posted photos of himself in his hospital bed, wrote that he had pneumonia and critically low oxygen levels and was going to be intubated. In a tweet Wednesday, Harmon wrote: “Don’t know when I’ll wake up, please pray,” KCBS-TV reported.

Three days before his death, Harmon tweeted: “If you don’t have faith that God can heal me over your stupid ventilator then keep the Hell out of my ICU room, there’s no room in here for fear or lack of faith!”

Before his hospitalization, Harmon had made fun of vaccination efforts on social media.

“Virtually every single person that is getting sick enough to be admitted to the hospital has not been vaccinated,” Friedman said.

California has seen escalating numbers of COVID-19 infections, led by the highly transmissible delta variant that has proliferated since the state fully reopened the economy last month. The vast majority of new cases are among unvaccinated people, and health officials have pleaded for people to get the shots.

On Friday, the state Department of Public Health reported nearly 8,000 new cases a day earlier and the testing positivity rate over seven days had jumped to more than 5% after dipping below 1% only a few weeks ago.

Los Angeles County, which has about a fourth of the state’s population, reported more than 3,000 new cases for the first time since February. There were 655 people with COVID-19 in hospitals, a jump of more than 200 people in a week, according to county figures.

Founder Brian Houston called him “one of the most generous people I know.”

“As a church, our focus is on the spiritual well-being of the people in each of our local communities. On any medical issue, we strongly encourage those in our church to follow the guidance of their doctors,” Houston said in a statement to KCBS-TV. “While many of our staff, leadership and congregation have already received the COVID-19 vaccine, we recognize this is a personal decision for each individual to make with the counsel of medical professionals.”

Fauci says US headed in `wrong direction’ on Covid