Russia says next time it may fire to hit intruding warships 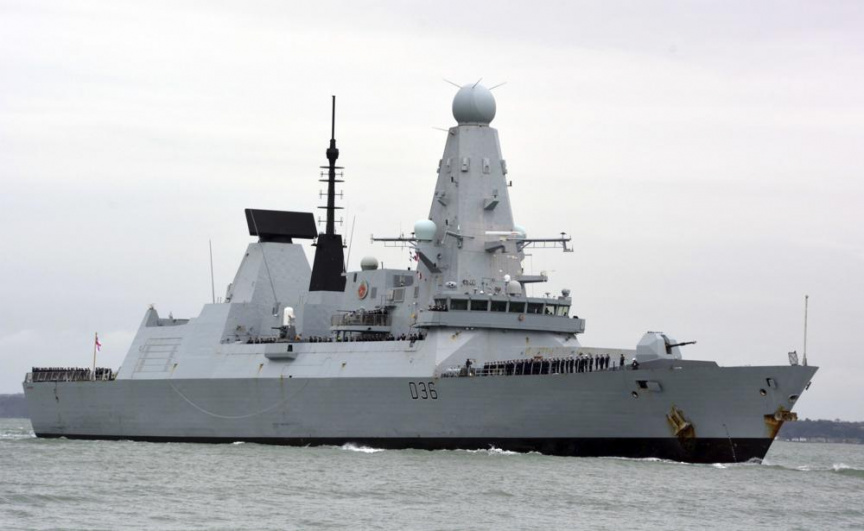 FILE - This March 20, 2020 file photo shows HMS Defender in Portsmouth, England. The Russian military says its warship has fired warning shots and a warplane dropped bombs to force the British destroyer from Russia's waters near Crimea in the Black Sea. The incident on Wednesday June 23, 2021, marks the first time since the Cold War era when Moscow used live ammunition to deter a NATO warship, reflecting soaring Russia-West tensions. (Ben Mitchell/PA via AP, File)

MOSCOW (AP) — Russia is prepared to target intruding warships if they fail to heed warnings, a senior Russian diplomat declared Thursday after a Black Sea incident in which a British destroyer sailed near Crimea in an area that Russia claims as its territorial waters.

Russia said one of its warships fired warning shots and a warplane dropped bombs in the path of British destroyer Defender on Wednesday to drive it away from waters near the Crimean city of Sevastopol. Britain denied that account insisted its ship wasn’t fired upon and said it was sailing in Ukrainian waters.

The incident marked the first time since the Cold War that Moscow acknowledged using live ammunition to deter a NATO warship, underlining the rising threat of military collisions amid Russia-West tensions.

Russian Deputy Foreign Minister Sergei Ryabkov said Thursday that “the inviolability of the Russian borders is an absolute imperative,” adding that it will be protected “by all means, diplomatic, political and military if needed.”

He sarcastically suggested the British navy should rename its destroyer from Defender to Aggressor and warned that “those who try to test our strength are taking high risks.” Asked what Russia would do to prevent such intrusions in the future, Ryabkov told reporters it would stand ready to fire on targets if warnings don’t work.

“We may appeal to reason and demand to respect international law,” Ryabkov said in remarks carried by Russian news agencies. “If it doesn’t help, we may drop bombs and not just in the path but right on target, if colleagues don’t get it otherwise.”

Kremlin spokesman Dmitry Peskov deplored what he described as a “deliberate and well-prepared provocation” by Britain and seconded the tough warning.

“If unacceptable provocative actions are repeated, if those actions go too far, no options to legitimately protect the borders of the Russian Federation could be excluded,” Peskov told reporters.

On Wednesday, the Russian Defense Ministry said a patrol ship fired warning shots after the HMS Defender had ignored a notice against intrusion and sailed 3 kilometers (1.6 nautical miles) into Russia’s territorial waters near Sevastopol, the main Russian naval base in Crimea. It said a Russian Su-24 bomber also dropped four bombs ahead of the vessel to persuade the Defender to change course. Minutes later, the Defender left Russian waters, the ministry said.

Britain denied the Defender had been fired on or that bombs were dropped in its path. It insisted the ship was making a routine journey through an internationally recognized travel lane and remained in Ukrainian waters. The U.K., like most of the world, recognizes Crimea as part of Ukraine despite the peninsula’s 2014 annexation by Russia.

British Prime Minister Boris Johnson would not say whether he had personally approved the Defender’s voyage but suggested the Royal Navy was making a point by taking that route.

“The important point is that we don’t recognize the Russian annexation of Crimea, this is part of a sovereign Ukrainian territory,” Johnson told reporters Thursday during a visit to an army barracks in England. “It was entirely right that we should vindicate the law and pursue freedom of navigation in the way that we did, take the shortest route between two points, and that’s what we did.”

He denied that U.K.-Russia relations were at a historic low, noting that “I can remember times in my own lifetime when things have been far worse.”

“It was particularly emphasized that if such provocations are repeated, the British side will bear full responsibility for their possible consequences,” the ministry said.

The Russian navy chief, Adm. Nikolai Yevmenov, said Thursday that the British destroyer’s move was clearly provocative, noting that it ignored the warnings in a bid to test Russia’s resolve.

“They came to see how we act,” he told reporters in St. Petersburg. “And they only reacted to the power of weapons. Our navy acted in a competent and safe manner to stop the provocation.”

In April, Russia declared a broader area off Crimea closed to foreign naval ships until November, a move that drew strong protests from Ukraine and the West.

U.K. Defense Secretary Ben Wallace said in a written statement to Parliament that what he described as a Russian “live fire gunnery exercise” was “out of range” of the Defender’s position and posed no danger to her. He added that she was also overflown by Russian warplanes, some of them flying as low as 500 feet and making maneuvers that were “neither safe nor professional.”

Wallace admitted that at one point the Defender maneuvered “to avoid a hazard presented by a Russian coastguard vessel before re-assuming her intended course.”

A BBC report from HMS Defender did not show bombs being dropped but showed the ship being buzzed by Russian military aircraft and receiving a threat over the radio to change course or be fired upon.

Footage filmed from a Russian warplane and a drone that was released by the Russian Defense Ministry also showed Russian jets flying close to the Defender but didn’t feature any bombs dropped or warning shots fired. Another video released Thursday showed a Russian coast guard vessel firing warning shots with the Defender seen at a distance.

Mikhail Khodaryonok, a retired Russian army colonel who works as a military analyst in Moscow, said the Russian warplane apparently dropped bombs miles away from the British ship. He charged that the British denial that Russia had fired warning shots and dropped bombs to chase the Defender away was an attempt to save face.