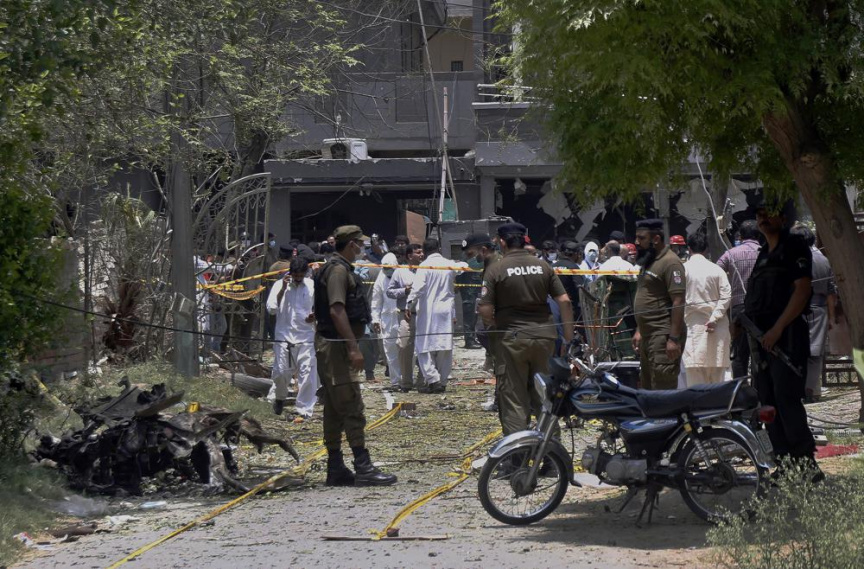 LAHORE, Pakistan (AP) — A powerful car bomb went off near the residence of a jailed anti-India militant leader in Pakistan on Wednesday, killing at least three people and wounding 25 others, police and rescue officials said.

The blast happened in the Johar Town neighborhood in the eastern city of Lahore, provincial police chief Inam Ghani told reporters. He said officers were still trying to determine whether it was a suicide bombing or the bomb was remotely detonated.

Ghani said some police officers were among the wounded.

“It was a car bomb, but we are still trying to confirm whether it was a suicide bombing,” he said.

He confirmed that the bombing happened near the residence of anti-India militant leader Hafiz Saeed, who has been designated a terrorist by the U.S. Justice Department and has a $10 million bounty on his head.

Saeed is the founder of the outlawed Lashkar-e-Taiba group, which was blamed for the 2008 Mumbai attacks that killed 166 people.

Lashkar-e-Taiba was active for years mainly in Kashmir, which is split between Pakistan and India and is claimed by both in its entirety. In the Indian-controlled sector of Kashmir, rebels have been fighting against Indian rule since 1989. Most Muslim Kashmiris support the rebel goal that the territory be united either under Pakistani rule or as an independent country.

India accuses Pakistan of backing rebels in the Indian part of Kashmir, a charge Pakistan denies. Pakistan says it only provides moral, political and diplomatic support to the Kashmiri people, and that this support will continue until they get the right to self-determination under a U.N. resolution.

TV footage showed badly damaged homes, and many residents spoke of a bomb attack. Doctors say some of the wounded were in critical condition.

Ghani said police were guarding Saeed’s house at the time of the attack. He said the attackers might have succeeded in targeting Saeed’s home had police not set up a security post in the street where the bombing happened.

Last year, Pakistan sentenced Saeed to 15 years in jail in a terror-financing case, but he was never charged in connection with the Mumbai attacks.

Saeed, who is serving the jail term at his home under a special government order, escaped unharmed, but the windows of his house were also shattered. The bombing damaged several homes and the government announced compensation for those residents whose property was damaged in the attack.

Pakistan and India have a history of bitter relations and they have fought two of their three wars over Kashmir since gaining independence in 1947.

Pakistan urges to help Afghan based on past mistakes

Pakistan says India was behind bomb blast in Lahore