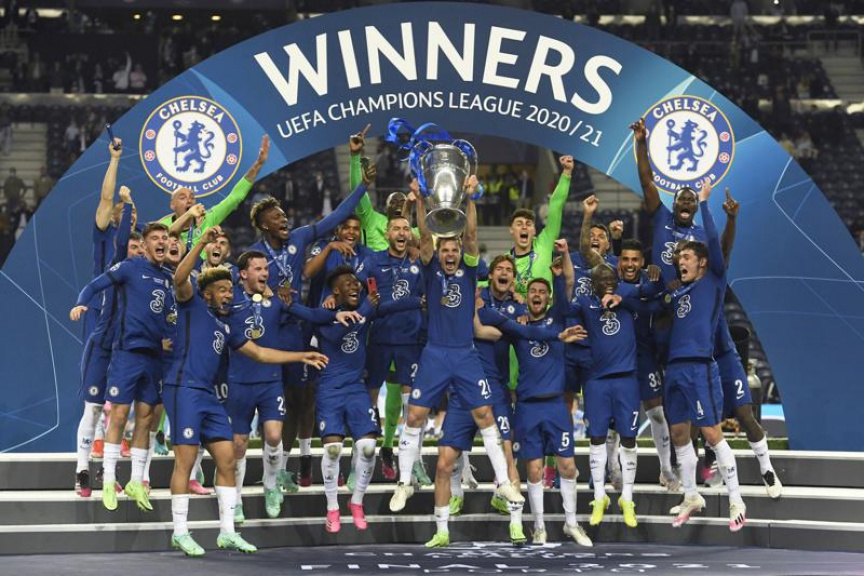 Chelsea's team captain Cesar Azpilicueta lifts the trophy at the end of the Champions League final soccer match between Manchester City and Chelsea at the Dragao Stadium in Porto, Portugal, Saturday, May 29, 2021. (Pierre Philippe Marcou/Pool via AP)

The three clubs who refused to renounce the Super League project are facing a possible ban from the Champions League, although that now looks unlikely before next season.

Barcelona, Juventus and Real Madrid won a ruling from a Spanish court in April that they could not be punished by Switzerland-based UEFA and FIFA. Their case was also referred by the judge in Madrid to the European Court of Justice in Luxembourg which could weigh in if UEFA is breaching competition laws.

“The UEFA Appeals Body has decided to stay the proceedings until further notice,” the European soccer body said in a statement, acknowledging it was notified by Swiss authorities last week of the Madrid court order.

“UEFA understands why the disciplinary proceedings needed to be suspended for the time being, but remains confident in and will continue to defend its position in all the relevant jurisdictions.”

It was unclear if next steps will see UEFA challenge the injunction in Madrid or seek to persuade judges in Luxembourg, where the timeline for rulings could take at least several months unless fast-tracked.

All three holdout clubs qualified for next season’s Champions League though none won their domestic league title. Their national federations submitted entries for all three with UEFA and the group-stage draw is scheduled for Aug. 26.

The plan to split from the existing Champions League run by UEFA collapsed within 48 hours in April after the English clubs — Arsenal, Chelsea, Liverpool, Tottenham and Manchester clubs United and City — pulled out amid a backlash from their own fans and the government.

The Premier League on Wednesday said its fines amount to around 3.6 million pounds ($5.1 million) per club, with the cash being invested in support for fans, grassroots leagues and community programs. The league called the clubs’ acceptance of the fines a “gesture of goodwill.”

“They have wholeheartedly apologized to their fans, fellow clubs, the Premier League and the FA (Football Association),” the league said in a statement.

They have accepted being deducted 30 points and fined 25 million pounds ($35 million) if they try to join any similar sort of largely closed competition in the future that isn’t part of the established structures.

It’s a second round of sanctions for the six English clubs. They agreed a settlement deal with UEFA last month joined by the other Italian and Spanish teams among the Super League founders: AC Milan, Inter Milan and Atlético Madrid.

The nine agreed to UEFA’s terms to forfeit 5% of their prize money from European competitions in the 2022-23 season and pay a combined 15 million euros ($18.3 million) also as a “gesture of goodwill” to benefit children, youth and grassroots football.

For top clubs, a successful season in the Champions League currently earns around 100 million euros ($122 million) in UEFA prize money.

After UEFA formally opened the disciplinary case two weeks ago, Barcelona, Juventus and Madrid said in a joint statement they would not accept “any form of coercion or intolerable pressure.”

The statutes of UEFA and FIFA prohibit clubs taking disputes to local courts outside soccer’s judicial bodies whose decisions can be appealed to the Court of Arbitration for Sport in Switzerland.

Barcelona, Juventus and Madrid have claimed they are trying to change the traditional structure of European soccer, after teams and leagues were badly hit financially by the COVID-19 pandemic.

“Either we reform football or we will have to watch its inevitable downfall,” they said last month.

Italy convincing in 3-0 win over Turkey to open Euro