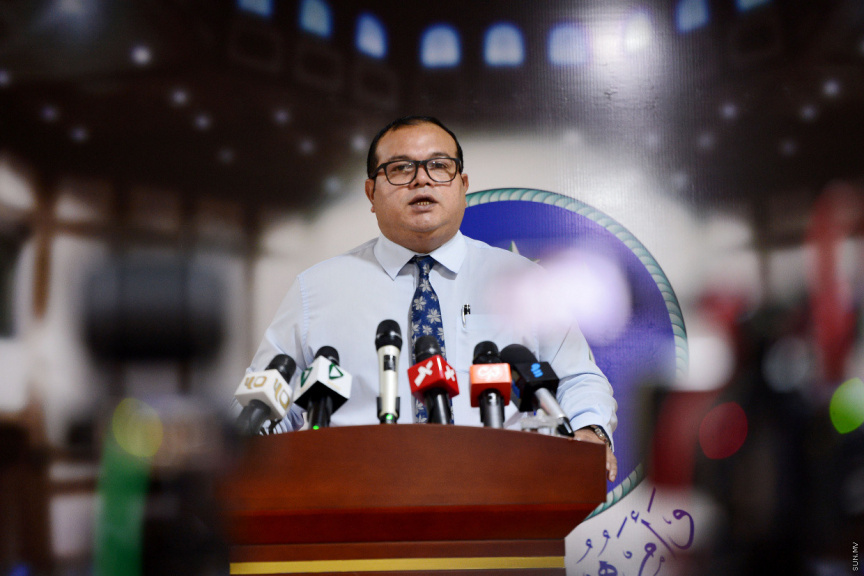 The chair of the Parliament's Committee on National Security Services (241 Committee) MP Mohamed Aslam has said that the government is not interfering in the Committee inquiry regarding the terrorist attack targeting Speaker of the Parliament Mohamed Nasheed.

Some MDP lawmakers loyal to Speaker Nasheed have alleged that the government was interfering in the parliamentary inquiry. In a press conference at the Parliament today, Committee Chair and MP for North Hithadhoo Aslam said that government bodies were so far cooperating with the investigation and was not interfering in any way.

"No, I have not noticed state bodies obstructing the inquiry. Police and MNDF are cooperating with the Committee for the inquiry," said MP Aslam who added that President Ibrahim Mohamed Solih wished the inquiry to go well.

"I have no information regarding the government wishing to obstruct the inquiry. The President directly requested me to conduct the inquiry well, in communications," said MP Aslam.

There have been controversy within the inquiry after the Defense Ministry responded to a summon request by the Committee for individual officers of the army to testify, that such a move would go against the chain of command and the norms and policies within the army. The Defense Ministry said that the army would provide answers to the Committee inquiry as a whole, instead of specific officers. The move has angered a number of supporters loyal to Speaker Nasheed, and even parliamentarians.

Regarding the matter, MP Aslam said that a list of 40 officers had been prepared but they have not been issued the summons as of yet. He said that so far, everyone who had been issued a summons had attended the Committee meeting.

MP Aslam further said that seven individuals had so far been questioned by the Committee. They include former Mayor of Male' City Shifa Mohamed, Vice Chief of Defense Force Abdul Raheem Abdul Latheef, Chief of Defense Force Abdulla Shamaal as well as Housing Minister Mohamed Aslam. More officers will be questioned by the Committee, according to MP Aslam.

"I believe that the Committee should get information from different sources and that it cannot be obstructed. So far, police and MNDF are cooperating with the inquiry," said MP Aslam.

He added that Defense Minister Mariya Ahmed Didi, and Home Minister Imran Abdulla will also be summoned for the inquiry soon. He said that the Committee inquiry was going along with the schedule and a finalized report was now in the works to submit to the Parliament.

The scope of the inquiry will be focused on five areas according to the Committee, including whether the security forces or any state body had prior knowledge of the attack, the standards for the security forces in providing protection, conduct, and standards of the protection provided to Nasheed, how finance and intelligence information is collected and how much compliance was there towards legal requirements and necessities.

MP Aslam, who is leading the inquiry maintained that the inquiry will be independent and fair.

The government is also conducting a separate intelligence audit with a Committee, as the Committee conducts its inquiry.

Man passes away after diving for bait fishing