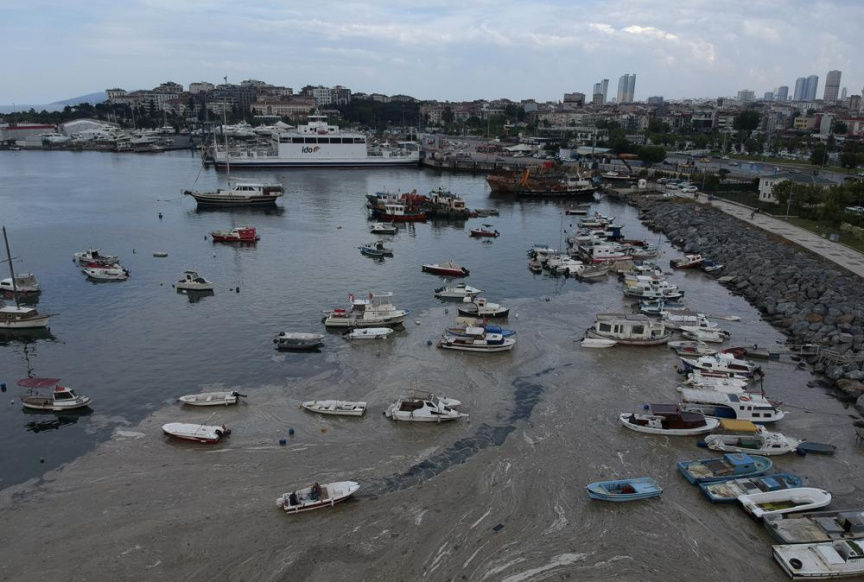 An aerial photo of Pendik port in Asian side of Istanbul, Friday, June 4, 2021, with a huge mass of marine mucilage, a thick, slimy substance made up of compounds released by marine organisms, in Turkey's Marmara Sea. (AP Photo)

ISTANBUL (AP) — Turkey’s president promised Saturday to rescue the Marmara Sea from an outbreak of “sea snot” that is alarming marine biologists and environmentalists.

A huge mass of marine mucilage, a thick, slimy substance made up of compounds released by marine organisms, has bloomed in Turkey’s Marmara, as well as in the adjoining Black and Aegean Seas.

Marine mucilage has reached unprecedented levels this year in Turkey. It is visible above the water as a slimy gray sheet along the shores of Istanbul and neighboring provinces. Underwater videos showed suffocated coral covered with sea snot.

Erdogan said he instructed the Ministry of Environment and Urbanization to coordinate with relevant institutions, municipalities and universities. Teams are inspecting waste water and solid waste facilities, along with other potential sources of pollution, he said.

“We will save our seas from this mucilage calamity, leading with the Marmara Sea,” Erdogan said. “We must take this step without delay.”

Marine experts say that human waste and industrial pollution is choking Turkey’s seas. They say the rise in water temperatures from climate change is contributing to the problem.