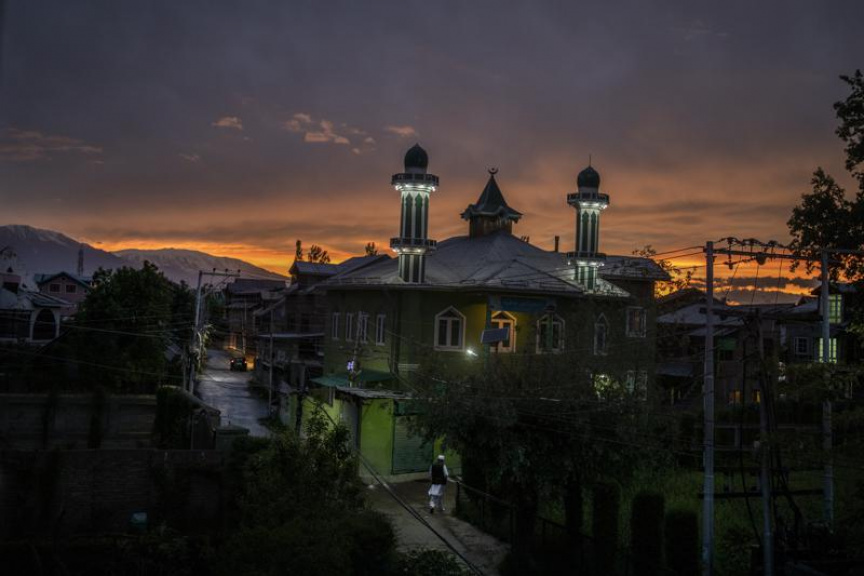 A Kashmiri Muslim walks towards a mosque during sunset in Srinagar, India, Friday, May 14, 2021. (AP Photo/Altaf Qadri)

Police said in a statement they were keeping a “close watch on elements who are attempting to leverage the unfortunate situation in Palestine to disturb public peace and order” in Kashmir. The statement said police were “sensitive to public anguish” but wouldn’t allow those sentiments to “trigger violence, lawlessness and disorder.”

The Muslim-majority Himalayan region of Kashmir is divided between India and Pakistan and claimed by both in its entirety. Kashmiris have long shown strong solidarity with Palestinians and have often staged anti-Israel protests when fighting broke out in Gaza.

Police inspector-general Vijay Kumar told reporters that 20 people were arrested in Srinagar, the region’s main city, and one from a village in southern Kashmir.

A police officer, speaking anonymously in line with department policy, said the 21 were arrested for social media posts, taking part in anti-Israel protests and making graffiti in solidarity with Palestinians in Gaza and Jerusalem.

Some of the arrested could be soon released after “counseling and assurances from their parents that they would desist from such acts in future,” the officer said.

The officer said the arrested include Sarjan Barkati, a Muslim cleric and a prominent anti-India activist, as well as an artist. The artist was arrested for painting pro-Palestinian graffiti on a bridge in Srinagar on Friday showing a woman wearing a scarf made of a Palestinian flag and a tear tricking from her eye, with the words: “WE ARE PALESTINE.” The graffiti was later painted over by police.

Since Monday, Israel has pounded the Gaza Strip with airstrikes and Palestinian militants have fired hundreds of rockets into Israel. The latest round of fighting between the bitter enemies has already begun to resemble — and even exceed — a devastating 50-day war in 2014.

During that war, large anti-Israel protests erupted in Kashmir, which often morphed into clashes with demands of an end of India’s rule over the region and causing dozens of casualties.

Relations between Hindu-majority India and Israel have long been viewed with suspicion and hostility in Kashmir, and Israel has also emerged as a key arms supplier to India.

Officials now say no ban on animal sacrifice in Kashmir