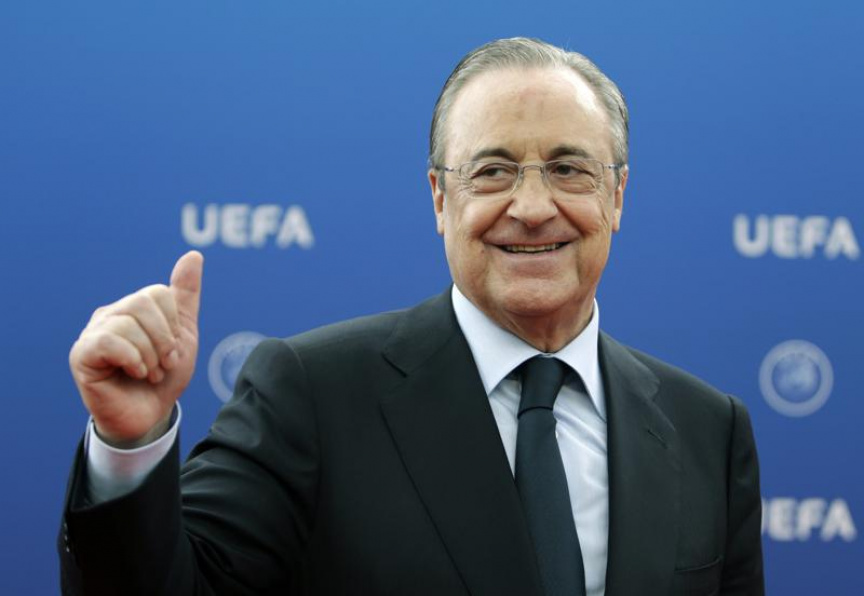 In this file photo dated Thursday, Aug. 30, 2018, Real Madrid President Florentino Perez gives a thumbs up as he arrives for the UEFA Champions League draw at the Grimaldi Forum, in Monaco. (AP Photo/Claude Paris, File)

MADRID (AP) — Real Madrid’s president insists all 12 clubs that signed up for the ill-fated Super League are still bound by contract to launching the controversial breakaway of Europe’s elite soccer teams.

In an interview with Spanish sports daily AS on Saturday, Madrid president Florentino Pérez said the clubs can’t back out like some have announced.

“The fact is, the clubs can’t leave,” Pérez said. “Some, because of the pressure, have had to say they’ll leave. But this project, or something very similar, will happen, and I hope it’s in the near future.”

All six English clubs — Arsenal, Chelsea, Liverpool, Manchester City, Manchester United and Tottenham — backed away from the proposal within 48 hours of its unveiling last weekend because of a backlash by fans and authorities. Atletico Madrid and Inter Milan followed suit a day later.

Barcelona has maintained its support for a project president Joan Laporta says is “absolutely necessary” for his troubled club’s finances, while acknowledging that the scheme’s critics must be listened to.

Italian heavyweights Juventus and AC Milan admitted the project was going nowhere immediately, while leaving open the possibility of joining a Super League at a later date.

The 74-year-old Pérez, who has presided over Madrid for most of the past two decades, was supposed to be the first chairman of the Super League of 20 teams that would replace the Champions League run by UEFA.

“That’s not true, they haven’t left either. They’ve taken time to reflect, like the 12 clubs,” he said. “If something needs to be changed, it’ll be changed, but the Super League is the best project we’ve thought can be carried out.”

The Madrid president maintained his position that the pandemic has aggravated the financial troubles big clubs face, including what he said was the dwindling interest of soccer among young people.

He predicted a grim future for his club and others.

“Either we fix this ... or all the clubs go bankrupt,” he said. “There will be a mutiny of the teams as they go bankrupt, because the only ones who will survive will be state financed clubs or who have multimillionaire owners, who are willing, for their own entertainment, to lose hundreds of millions (of euros) each season.”

The plan’s critics, which include UEFA, the national leagues, and the clubs not involved, say the Super League will do more harm than good by concentrating revenues in fewer hands.

Former MP and four others apply to Police Board

JSC investigation into violation of right to counsel