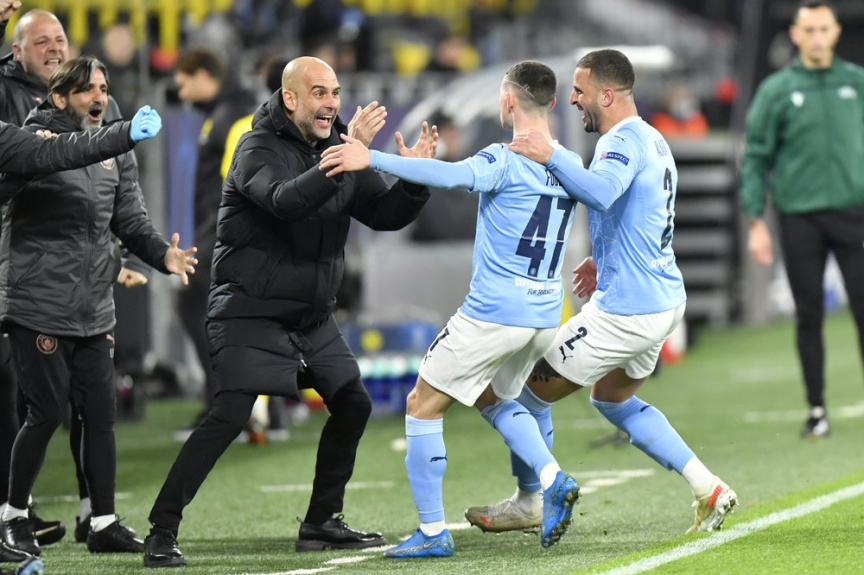 Jude Bellingham scored to put Dortmund on course for an upset win before City hit back through a penalty by Riyad Mahrez and Foden’s goal.

Guardiola reached the semifinals with City at the fifth attempt, matching the club’s best ever result under his predecessor Manuel Pellegrini in 2016. City goes on to face Paris Saint-Germain.

“For the club it’s so important, we cannot deny,” Guardiola said. “Of course we want more.”

He praised PSG for knocking out “the best team in the world” — Bayern Munich — in the quarterfinals, “so we will see what will happen.”

Guardiola said Tuesday he expected to be labeled “a failure” if Dortmund became the fourth club in a row to eliminate City in a Champions League quarterfinal, after Lyon last year and before that Tottenham and Liverpool. Monaco beat City in the round of 16 in 2017 in Guardiola’s first season.

“We are incredibly happy today to reach the semifinals,” Guardiola told broadcaster Sky. ”The guys deserve it because what they have done in this season is incredible.” Guardiola added that City would celebrate with “a lot of wine tonight” before preparing to face Chelsea in the FA Cup semifinals on Saturday.

Bellingham, Dortmund’s 17-year-old English midfielder, put the German club ahead when he scored in the 15th minute after City defender Ruben Dias blocked Mahmoud Dahoud’s shot. That leveled the aggregate score 2-2, with Dortmund ahead on away goals.

Bellingham became the second-youngest player to score in a Champions League knockout game at 17 years, 289 days. Bojan Krkic was 72 days younger when he scored for Barcelona against Schalke in 2008.

City then laid siege to the Dortmund goal, with Kevin De Bruyne hitting the crossbar. And Dortmund handed City the breakthrough early in the second half when Emre Can gave away a penalty by heading a cross onto his arm. Mahrez put City back in control when he blasted the 55th-minute spot kick into the top right, past stand-in goalkeeper Marwin Hitz.

Dortmund was unhappy with the penalty call against Can, a week after Bellingham had a goal ruled out in the first leg in disputed circumstances.

“If you head onto your own arm, it’s not seen as a breach of the rules,” coach Edin Terzic said. “We haven’t had much luck with referee decisions in the last week.”

Chasing another goal to force extra time, Dortmund pushed up, but could only muster an off-target header from Mats Hummels at a free kick. City took advantage of the space which opened up to pressure Dortmund.

Foden, who also scored in the first leg last week, made sure of the win in the 75th with a low shot past Hitz from the edge of the box off a short corner routine. He ran straight to Guardiola on the touchline to celebrate with a hug.

“You have the feeling he’s a guy who never hides and, he always creates something. he is dynamic defensively, offensively,” Guardiola said of Foden. “He scored two important goals, the second goal in the Etihad (in the first leg) and today and helped us to the semifinals.”

The loss means Dortmund could face an exodus of talented young players at the end of the season. Part of the appeal to talents like striker Erling Haaland and forward Jadon Sancho — the latter injured for this game — has been Dortmund’s consistent Champions League appearances as a way to develop their skills and show off to potential buyers. With Dortmund sitting fifth in the Bundesliga, it’s on course for the far less appealing Europa League.

Haaland played his part holding up the ball in the run-up to Bellingham’s goal, but the Norwegian was otherwise kept quiet by the City defense. He has now gone four scoreless games for Dortmund and three for Norway since his last goal on March 20.

“Through our passes, through our control, we minimized the influence of Haaland,” Guardiola said. “This player is almost unstoppable and the best way to defend talented players is (for them) not to have the ball.”