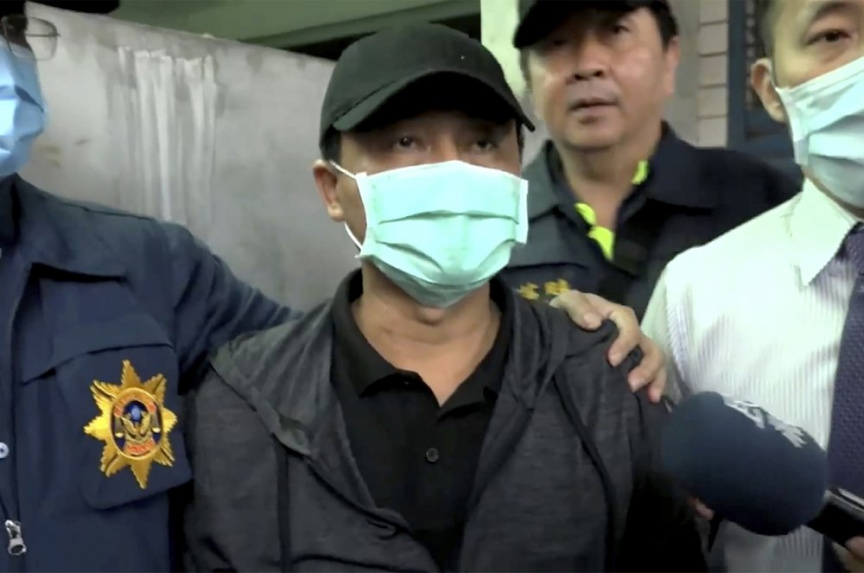 In this image taken from video, Lee Yi-hsiang, the driver of the truck that caused the train accident on Saturday, offers a public apology as he is led by police Sunday, April 4, 2021, in Hualien, Taiwan. (EBC via AP)

TAIPEI, Taiwan (AP) — The owner of a construction truck that caused Taiwan’s worst rail accident in decades, killing 48 people, apologized in tears while being led away from his home by police on Sunday. The unmanned truck’s emergency brake was not properly engaged, according to the government’s disaster relief center.

An investigation is underway as to how exactly Lee Yi-Hsiang’s vehicle slid down onto the tracks Friday from a nearby construction site on the mountainous coast of eastern Hualien county. The truck was hit by a passenger train carrying 494 people, which derailed just before entering a tunnel, crushing many passengers inside the mangled train carriages.

The death toll was revised down to 48 on Sunday, after rescuers initially said 51, then 50 people were killed. The changes came after some body parts were found to belong to one individual, a spokesperson for the Central Emergency Operation Center said. At least 198 people were injured.

“I have caused a serious accident on the Taiwan Railway Administrations’ Taroko train number 480 during this year’s Tomb Sweeping Holidays, causing deaths and injuries, to this I express my remorse and my sincerest apologies,” said Lee, who is also the construction site’s manager, his words muffled by a face mask and by emotion. “I will cooperate with the authorities’ investigation fully, and take responsibility.”

Prosecutors in Hualien county previously said they were seeking an arrest warrant for the truck’s owner, who was questioned along with several others.

The Hualien district court initially allowed Lee to post bail of 500,000 new Taiwan dollars (US$17,516), but that decision was reversed Sunday when a higher court in Hualien rescinded the lower court’s decision to allow bail, Taiwan’s Central News Agency reported.

Train travel is popular during Taiwan’s four-day Tomb Sweeping holiday, when families often return to their home towns to pay respects at the gravesites of their elders. It’s also an opportunity to take a vacation.

Taiwan is a mountainous island, and most of its 24 million people live in the flatlands along the northern and western coasts that are home to most of the island’s farmland, biggest cities and high-tech industries. The lightly populated east where the crash happened is popular as a tourist destination, and the railway line is known for its beautiful natural scenery.