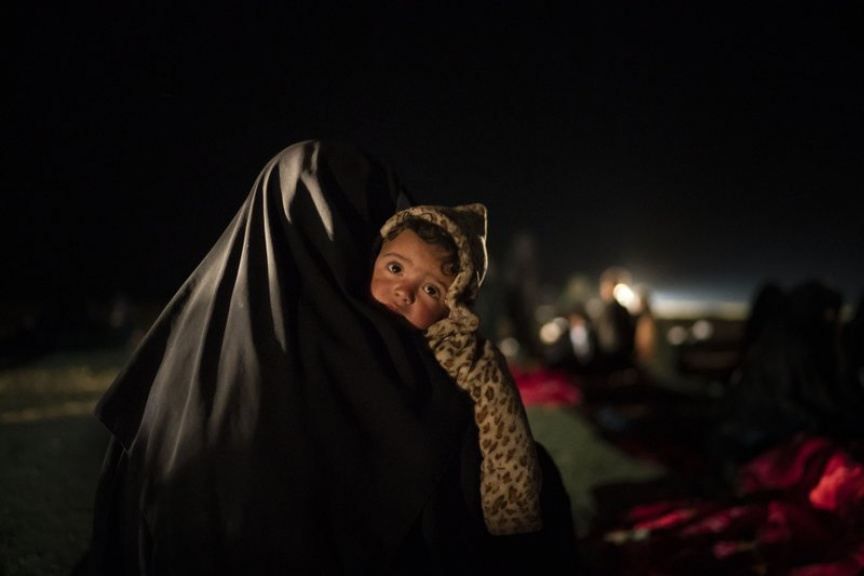 In this Feb. 25, 2019 file photo, a woman carries her baby at a screening center run by U.S.-backed Syrian Democratic Forces after being evacuated out of the last territory held by Islamic State militants, outside Baghouz, Syria. (AP Photo/Felipe Dana, File)

BEIRUT (AP) — Thousands of Kurdish-led forces, with assistance from the U.S.-led coalition, launched a military operation Sunday at a sprawling camp in northeast Syria, in a new effort to identify and arrest Islamic State militants and tamp down escalating killings and violence in the camp.

The security sweep at the al-Hol camp will continue over time and is being conducted with “indirect” intelligence, surveillance and reconnaissance support provided by the coalition, U.S. officials said Sunday.

The Kurdish-led forces said they have nearly 5,000 fighters participating in the operation and on Sunday they arrested nine people, including an Iraqi IS member who worked in recruitment.

The al-Hol camp houses some 62,000 people, including wives and children of IS members, and U.S. officials say it has become a breeding ground for the next generation of Islamic State militants.

There have been 47 killings in the camp since the start of 2021, according to the Kurdish-led forces, while U.S officials put the figure at well over 60.

Military leaders have long warned of the growing security problems in the camp. In comments to the Middle East Institute in February, Gen. Frank McKenzie, head of U.S. Central Command, said the “systemic indoctrination” of the camp’s population to IS ideology is an alarming, long-term risk.

Col. Wayne Marotta, spokesman for the U.S.-backed coalition, said the new military operation is designed to disrupt IS activities in the camp and ensure the security of the residents.

Marotta also said the Kurdish-led forces are enrolling residents in the camps using biometric technology to help “maintain security by identifying (those residing in the camp) connected to terrorist activities.”

Most of the recent victims at al-Hol were shot in the back of the head at close range, according to the Syrian Observatory for Human Rights and the Rojava Information Center, an activist collective that tracks news in areas controlled by the Kurdish-led forces: the Syrian Defense Forces and local Kurdish security forces known as Asayish.

Among those killed so far this year were a policeman who was shot, an Iraqi man who was beheaded, a local official who was gunned down and at least five women. Most were killed in their tents or shelters at night, RIC said.

The slayings at the camp are largely believed to have been carried out by IS militants punishing perceived enemies and intimidating anyone who wavers from their extremist line, according to Syrian Kurdish officials who run the camp but say they struggle to keep it under control.

The jump in violence has heightened calls for countries to repatriate their citizens languishing in the camp. The repatriations were already limited, but they have slowed dramatically because of the coronavirus epidemic.

“Unless the international community finds a way to repatriate, reintegrate into home communities, and support locally grown reconciliation programs, we will bear witness to the indoctrination of the next generation of ISIS as these children become radicalized,” McKenzie said last month. “Failing to address this now means ISIS will never be truly defeated, as the ideology will continue well into the future.”

McKenzie and other U.S. defense officials have expressed frustration at the slow pace of repatriation of the refugees to their home countries.

“It’s concerning to me that we’re moving so slowly because we could either deal with this problem now, or deal with it exponentially worse a few years down the road,” McKenzie said in comments to the U.S. Institute of Peace last summer. “And what worries me tactically also is the prospect of massive infection in the camp from coronavirus, although again, there are many other bad things that could happen in that camp as well.”

Al-Hol houses the wives, widows, children and other family members of IS militants, hundreds of whom are held in prisons. More than 80% of the 62,000 camp residents are women and children. As of earlier this year, McKenzie said about two thirds of the population is under the age of 18, with more than half under the age of 12 and one third under the age of 5.

The majority of the population are Iraqis and Syrians, but there are also some 10,000 people from 57 other countries.

It has been two years since the U.S.-led coalition captured the last sliver of territory held by the Islamic State group, ending its self-declared caliphate that covered large parts of Iraq and Syria. The brutal war took several years and left U.S.-allied Kurdish authorities in control of eastern and northeast Syria, with a small presence of several hundred American forces still deployed there.

Since then, remaining IS militants have gone underground in the Syrian-Iraqi border region, continuing an insurgency. Thousands of family members who had stayed in the last sliver of land the group held were moved to the camp or prisons.

IS women in Syria camp clash with police, 1 killed

Syria forces retake prison a week after IS assault