Committee: No wrongdoings by Immigration in departure of Ali Waheed 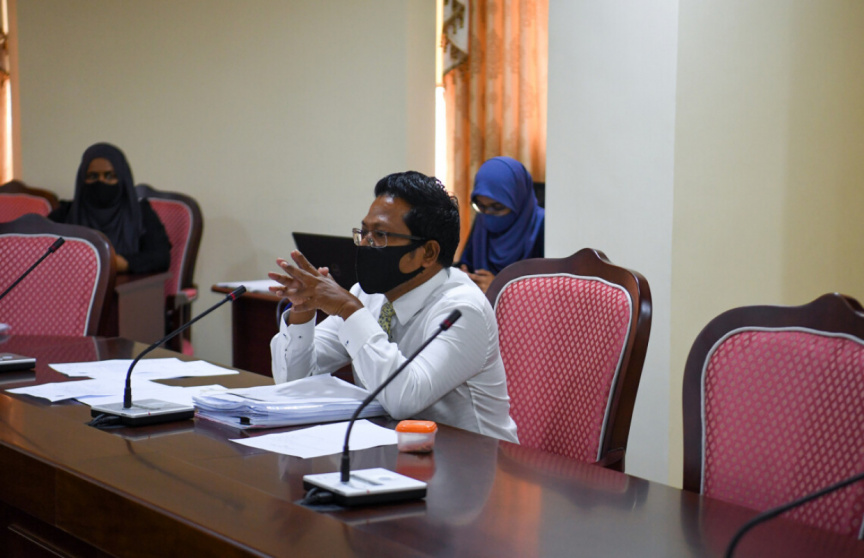 The Chair of the Judiciary Committee of the Parliament and MP for North Maafannu Imthiyaz Fahmy. (Photo/Parliament)

The Chair of the Judiciary Committee of the Parliament and MP for North Maafannu Imthiyaz Fahmy has said that there was no wrongdoing on the part of Maldives Immigration in relation to the departure of former Tourism Minister Ali Waheed who is facing seven charges of sexual abuse and misconduct in the workplace.

Ali Waheed was fired from his post after allegations made by Tourism Ministry employees. Ali Waheed, who was one of the most senior members of the cabinet then, was fired by President Ibrahim Mohamed Solih after he refused to resign. Ali Waheed later left the Maldives for the UK, after a court in the Maldives permitted him to travel for medical reasons upon the testimony of a medical doctor. Ali Waheed has denied all the charges as a huge political conspiracy against him.

PG Hussain Shameem has previously said that Ali Waheed departed before the court order permitting his travel. According to the PG, the court order releasing Ali Waheed's passport came after a day of his departure. The Judiciary Committee today met with Maldives Immigration over the departure of Ali Waheed and inquired whether the institution had acted lawfully. Committee Chair Imthiyaz said that from the findings of the committee, the Immigration had not committed any wrongdoings, as he was answering a question by a committee member.

“Immigration is mandated to follow the orders of the courts. Implementing the orders. It is how things are arranged whereby Immigration is to release the passport if a court order, whether it is just or not, comes through,” said MP Imthiyaz.

MP Imthiyaz also noted an ethics issue of the judge who ordered the release of Ali Waheed’s passport, which was submitted to the Judicial Service Commission (JSC) by the PG. He asked members to remain wary of the ethics complaint.

Ali Waheed’s passport was released for four months. If he does not return, his guarantor Youth Ministry’s State Miniter and a close friend of Ali Waheed, Assad Ali will be reprimanded.

The committee today, also moved to amend the regulations related to travel of those accused of serious crimes. Instead of the release of their passports, a temporary travel document is to be issued for such travels. The committee made a number of recommendations in the report finalized today regarding the inquiry into the departure of Ali Waheed. Courts are also to look into whether the accused has the financial means to live abroad and whether they may use the resources at their disposal to escape justice. The temporary document is also to include details of their travel such as the date of departure and the return date. The accused are to attend court hearings scheduled as per the travel documents.