India steps up measures to check entry of Myanmar refugees 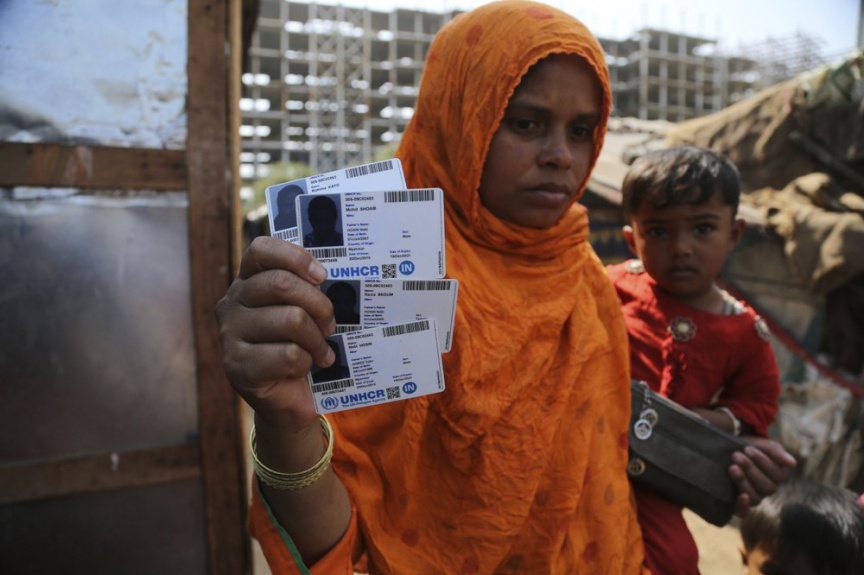 In this March 9, 2021 file photo, Rahima Kato, a Rohingya woman displays identity cards of her family members issued by United Nations High Commissioner for Refugees (UNHCR) at their makeshift camp on the outskirts of Jammu, India. (AP Photo/Channi Anand)

India’s Home Ministry asked the states to deal with such people strictly on a case-to-case basis on humanitarian grounds.

“I am aware of the Home Ministry directive,” Kumar Abhishek, a government administrator in Serchhip district in Mizoram state, told reporters.

The directive cautioned that the four states were not authorized to accord refugee status to anyone entering India from Myanmar, as India is not a signatory to the U.N. Refugee Convention of 1951 and its 1967 Protocol.

The government directive came after scores of people, including some police officers, entered Mizoram after the Feb. 1 coup in Myanmar.

Maria C.T. Zuali, a Mizoram state official in Champai district, said she received a letter from her Myanmar counterpart last week asking to return the officers to “uphold the friendship between Myanmar and India.”

Indian police have detained at least seven Myanmar police officers. They told Indian authorities they ran away because the Myanmar army was on their trail after they refused to obey orders.

Indian police did not explain what orders the officers had refused. They wore civilian clothes and were not armed.

India shares a 1,643-kilometer (1,020-mile) border with Myanmar, and is home to thousands of refugees from Myanmar in different states.