Chelsea retains 4th in EPL with home win over Everton 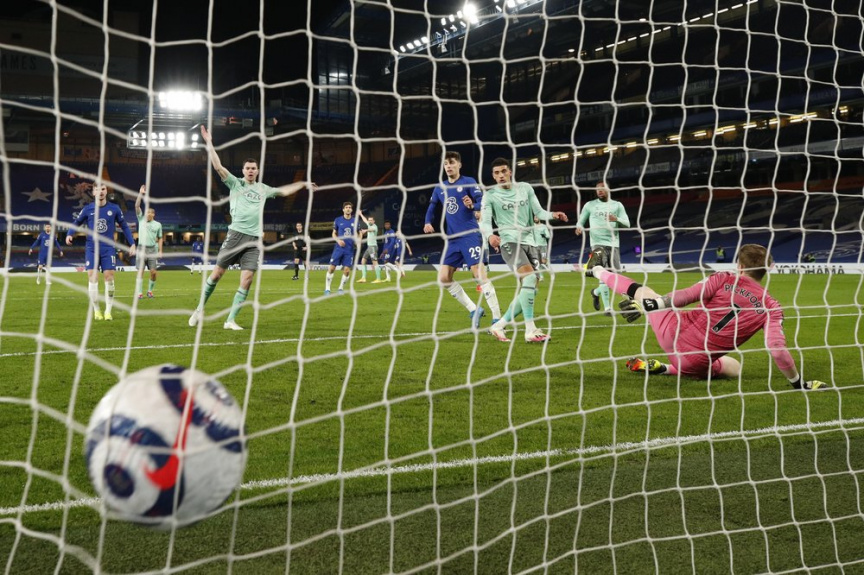 Everton's Ben Godfrey, center, scores an own goal during the English Premier League soccer match between Chelsea and Everton at the Stamford Bridge stadium in London, Monday, March 8, 2021. (John Sibley/Pool via AP)

LONDON (AP) — Kai Havertz is finally making an impact at Chelsea and helping the pursuit of Champions League qualification.

The Germany playmaker Havertz has struggled to convince since joining from Bayer Leverkusen in the offseason for up to 70 million pounds (then $92 million).

But Havertz helped Chelsea to beat Everton 2-0 at Stamford Bridge on Monday and was unlucky not to have a goal to his name after starring in the false nine position.

Havertz was unlucky not to be credited with Chelsea’s first goal, with Ben Godfrey’s deflection eventually confirmed as an own goal. The lively forward later saw a neat finish ruled out for handball before winning a penalty that Jorginho converted.

“I’m very happy with his performance, no doubt about his quality his talent and also not about his character,” Chelsea manager Thomas Tuchel said. “He needs to adapt to the Premier League, he needs to be at a club where you play to win every game, where the highest standards are normal. That’s a normal process also for him to adapt to this mentality.”

Chelsea boasts nine clean sheets in Tuchel’s 11 matches in charge, and only Maurizio Sarri with 12 games has enjoyed a longer unbeaten start to life at the club.

It leaves Chelsea two points ahead of fifth-placed West Ham, which beat Leeds 2-0 in the other game on Monday.

A year ago, West Ham was out of the relegation zone only on goal difference. Now the east London club is chasing European qualification.

West Ham took the lead in the 21st minute with virtually its first attack.

Jesse Lingard played a neat one-two with Said Benrahma and skipped into the area, where Luke Ayling clumsily brought him down. The Manchester United loanee’s penalty was saved by Leeds goalkeeper Ilan Meslier but he netted from the rebound.

“Once that first goal came, we settled down and now we’re starting to learn to win ugly,” West Ham captain Declan Rice said.

West Ham extended its lead when Craig Dawson arrived at the far post to head in Aaron Cresswell’s corner in the 28th.

“We didn’t play the best, but we’re grinding out those results, we’ve got a real solidity about us and long may that continue,” Rice said.

Juventus knocked out of CL by 10-man Porto