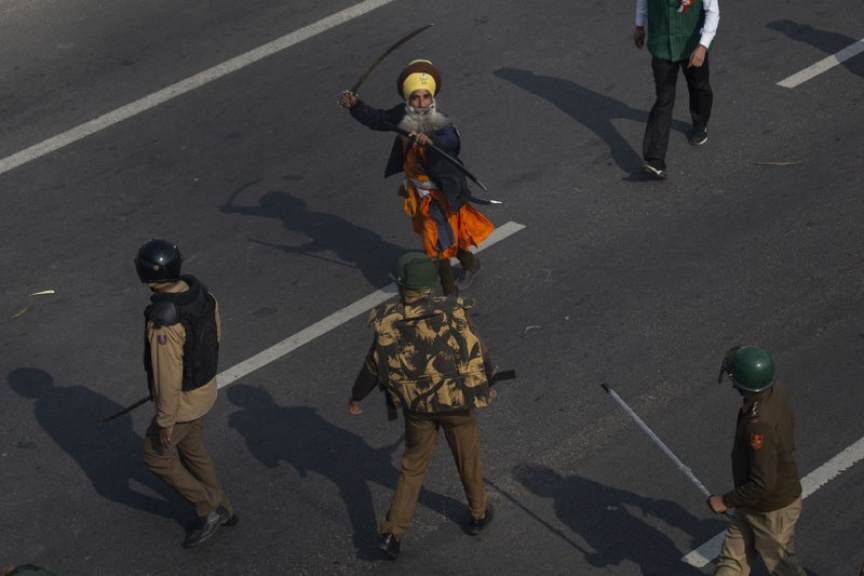 In this Jan.26, 2021 file photo, a Nihang, or a Sikh warrior, brandishes a sword at policemen as protesting farmers march to the capital breaking police barricades during India's Republic Day celebrations in New Delhi, India. (AP Photo/Altaf Qadri, File)

NEW DELHI (AP) — An Indian climate activist has been arrested for circulating a document on social media that allegedly incited protesting farmers to turn violent last month, leaving one protester dead and about 400 police officers injured during clashes in the Indian capital, police said Sunday.

Disha Ravi, 22, was arrested in the southern city of Bengaluru and appeared in a New Delhi court on Sunday, New Delhi police said in a statement.

The court sent her to police custody for five days to help in an investigation “into the criminal conspiracy related to the Toolkit document” that allegedly incited the farmers on Jan. 26, India’s Republic Day, police said.

The Indian government says the new laws are necessary to modernize Indian farming.

The farmers say the laws will benefit corporations and leave them at their mercy for negotiating prices for their crops. Tens of thousands of farmers have been camping on the outskirts of New Delhi since the last week of November.