9-0 again: Southampton slumps to record-tying loss to Man U 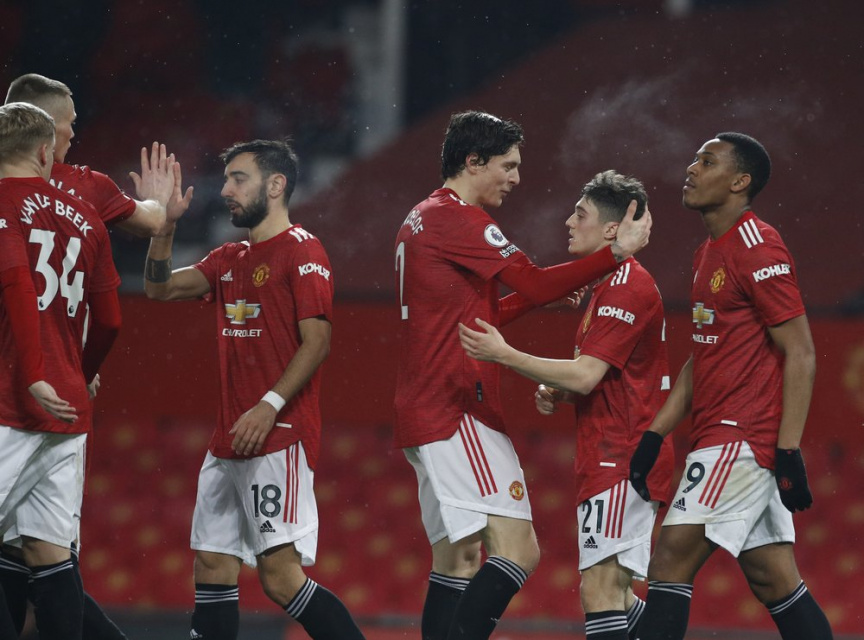 Ralph Hasenhuttl’s team has another 9-0 loss to get over after Manchester United cleaned up at Old Trafford to tie the biggest margin of victory since the Premier League began in 1992.

There have been two other games finishing by that score line — and Southampton was on the wrong end of one of them, losing 9-0 at home to Leicester in October 2019 for a club-record defeat.

“It doesn’t hurt less,” Hasenhuttl said. “It’s the opposite — it hurts even more.”

The other 9-0 in the record book also involved United, at home to Ipswich in 1995.

“In football, you have to make the most of it,” said United manager Ole Gunnar Solskjaer, whose team showed no mercy and scored three goals from the 87th minute. “It might be the last game you play.”

Southampton contributed to its own downfall by having two players sent off. The first red card came after just 82 seconds when 19-year-old midfielder Alexandre Jankewitz — making his first Premier League start and having yet to touch the ball — was dismissed for a thigh-high lunge on United’s Scott McTominay.

“It was a stupid foul from the young lad and kills everything,” Hasenhuttl said.

By the time Jan Bednarek, who scored an own-goal in the first half, was sent off for a brushing against an already falling Anthony Martial in the 86th minute, Southampton was trailing 6-0 and hanging on grimly to avoid more humiliation.

Bruno Fernandes converted the penalty, and further goals by Martial and Dan James meant Southampton’s players revisited a score they thought they had seen the back of.

“What can I say? It is horrible,” Hasenhuttl said. “But we stood up after the first 9-0 and we have to do that again.”

There were seven different scorers for United — Aaron Wan-Bissaka, Marcus Rashford, Edinson Cavani, Martial (two), McTominay, Fernandes and James — to go along with Bednarek’s own-goal. The team’s record win is 10-0 against Anderlecht in the European Cup in 1956.

By being relentless in its search for goals, United’s goal difference soared to +19, just five behind first-place Manchester City. That is all that’s separating the two local rivals, who both have 44 points.

In 2012, City won the Premier League for the first time courtesy of a superior goal difference to United.

“You never know what might be the deciding factor,” Solskjaer said. “We know better than anyone what goal difference can do to you.”

Remarkably, Southampton wasn’t the only team to finish with nine men on Tuesday, with Arsenal also having two players sent off — defender David Luiz and goalkeeper Bernd Leno — in a 2-1 loss at Wolverhampton.

There were also wins for last-place Sheffield United and Crystal Palace as the Premier League started its third round of games in a week in explosive fashion.

First, Luiz was given a straight red card for pulling back Willian José as Wolves’ new signing burst into the penalty area. Ruben Neves converted from the spot in the fifth minute of first-half stoppage time.

João Moutinho then gave Wolves the lead when he collected the ball about 30 meters out, took a touch, and smashed a rising drive in off the post in the 49th.

Arsenal’s evening then got worse when Leno came out of his area to clear the ball, but ended up bundling it out of play with his right arm. The German goalkeeper was red-carded for denying a goal-scoring opportunity.

The result ended Arsenal’s seven-match unbeaten run in the league.

The great escape might just be on for last-place Sheffield United.

After going the first 17 games without a win — a Premier League record — United has now won three of its last five after rallying to beat West Bromwich Albion 2-1 at home.

Billy Sharp scored the 74th-minute winner, which lifted Chris Wilder’s team onto 11 points — one behind West Brom but still 10 behind the side just above the relegation zone, fourth-from-last Brighton.

“I have a group that are alive and kicking and fighting for their lives,” Wilder said.

Palace also came from behind to beat Newcastle 2-1, with Gary Cahill grabbing the winner in the 25th to become — at 35 years and 45 days — the club’s oldest scorer in the Premier League.

Jonjo Shelvey put Newcastle ahead in the second minute before an equalizer from Jairo Reidewald.

Palace’s star forward, Wilfried Zaha, left in the second half with a suspected hamstring injury.

Man U fills striker void by signing Ighalo from China

Pogba or Mourinho: Who will last longer at United?