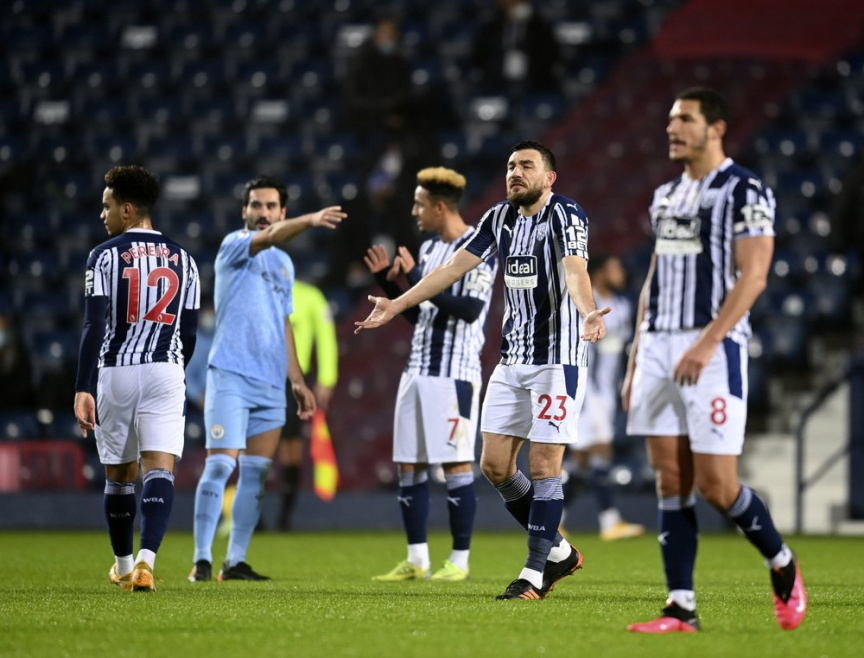 Fueled by a sparkling attacking display, Manchester City’s players powered to the top of the Premier League for the first time this season — and even the opposition are stopping to admire their work.

In a comical exhibit for VAR’s ever-lengthening highlights reel, West Bromwich Albion’s defenders virtually stopped in their tracks and looked on as Joao Cancelo curled a shot into the top corner for the second of City’s goals in a 5-0 rout on Tuesday.

After all, the assistant referee had raised the flag for offside moments earlier but City, unlike West Brom, played on as Bernardo Silva collected the ball and fed Cancelo, who — unchallenged — picked his spot from the edge of the area.

A video review showed Silva was actually onside and the goal was allowed to stand. City was on course to match its biggest league win of the season and, on the evidence of this game and the last couple of months, Pep Guardiola’s team is going to be hard to stop.

“Now, with VAR in these situations, we have to follow the actions until the end because you never know what is going to happen,” Guardiola said. “Is the goal allowed or disallowed? Nobody knows. So you have to continue until the end of the action.”

Make it seven straight wins in the league — and 11 in all competitions — for City in an ominous run of results. City became the ninth side to finish a day in first place this season, the most within a single top-flight campaign since 1986-87.

Even if Manchester United reclaims the lead on Wednesday by beating Sheffield United, City — on its longest winning run in more than three years — looks to be the team to beat.

Ilkay Gundogan netted twice to make it seven goals in the last eight league games for a midfielder who has never been a prolific scorer in his career but has hit a rich vein of form. Riyad Mahrez and Raheem Sterling set each other up for the final two goals.

Another central midfielder in scoring form is Tomas Soucek, who netted twice for West Ham in its 3-2 win at Crystal Palace that lifted the team to fourth place.

The Czech Republic international is proving a solid source of goals for West Ham, having scored seven times in his last 13 league matches.

In a tweet, he dedicated his double to his wife.

“The most beautiful feeling in football is when you realize you have helped your team,” Soucek wrote. “But this time I want to dedicate the win and my two goals to my wife. It’s really tough time for her as she can’t see anyone from the family. Thank you for taking care of me and our daughter!”

Arsenal avenged a defeat to Southampton in the FA Cup at the weekend by beating the Saints 3-1 in the league.

Arsenal came from behind to win for the first time in a Premier League game this season, having trailed after three minutes. Nicolas Pepe and Bukayo Saka replied before halftime, and Alexandre Lacazette made sure of the points with a third in the 72nd.

The win moved Mikel Arteta’s side above Southampton and up to eighth in the standings.

Newcastle’s winless run extended to 11 games in all competitions with a 2-1 home defeat to Leeds, piling the pressure on manager Steve Bruce.

Jack Harrison clinched three points with a swerving 61st-minute strike with the outside of his left foot, four minutes after Miguel Almiron canceled out Raphinha’s first-half opener for Leeds.

Leeds ended its three-game losing streak in all competitions.

Newcastle has taken only two points from the last 27 in the league and has dropped to 16th.