Iran general warns US: Military ready to respond to pressure 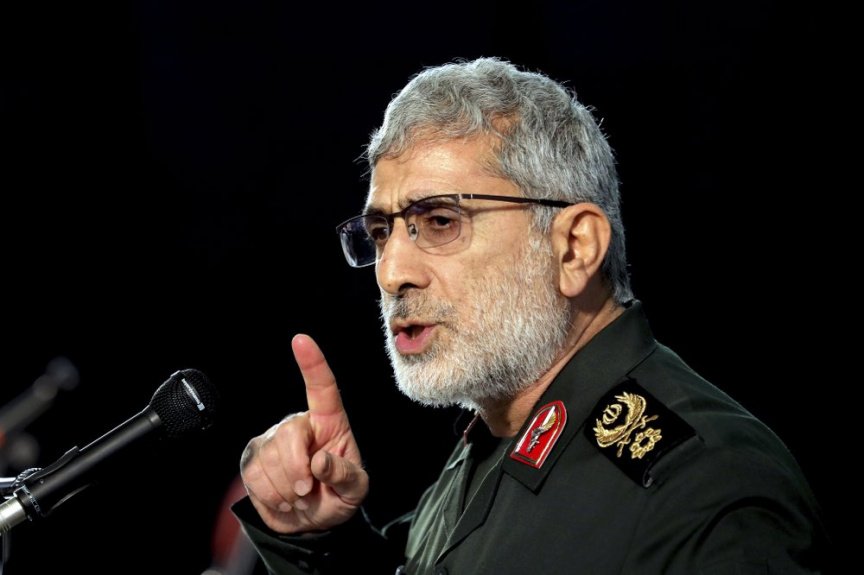 Gen. Esmail Ghaani, Soleimani's successor as the new head of Quds Force speaks during a ceremony on the occasion of first anniversary of death of the force's previous head Gen. Qassem Soleimani, in Tehran, Iran, Friday, Jan. 1, 2021. (AP Photo/Ebrahim Noroozi)

TEHRAN, Iran (AP) — The top commander of Iran’s paramilitary Revolutionary Guard said Friday that his country was fully prepared to respond to any U.S. military pressure as tensions between Tehran and Washington remain high in the waning days of President Donald Trump’s administration.

At the time, Iran retaliated by launching a ballistic missile strike on a military base in Iraq that caused brain concussion injuries to about 100 U.S. troops. Washington and Tehran came dangerously close to war as the crisis escalated.

“Today, we have no problem, concern or apprehension toward encountering any powers. We will give our final words to our enemies on the battlefield,” Salami said, without mentioning the U.S. directly. Several top Iranian officials, along with Syrian, Palestinian and Lebanese allies and members of Soleimani’s family, were in attendance.

Soleimani’s replacement, Brig. Gen. Esmail Ghaani, said at the ceremony that Iran was not afraid of confronting “powers,” again without naming the U.S. He also warned that “freedom seekers” within the U.S. could retaliate for the attack that killed Soleimani, telling America that “inside your own home, there might be those who want to respond to the crime that you committed.”

The head of Iran’s judiciary, Ebrahim Raisi, said all those who had a role in Soleimani’s killing will not be able to “escape law and justice,” even if they were a U.S. president.

Also, Iran’s Foreign Ministry tweeted that Iran will not rest until perpetrators of Soleimani’s killing are brought to justice.

“By committing a craven act of terror against Gen Soleimani, the US violated int’l law & the UN Charter in a blatant violation of Iraqi sovereignty,” said a post on the ministry’s Twitter account. “The US’ lawlessness in full show. #Iran won’t rest until bringing those responsible to justice.”

Iranian Foreign Minister Mohammad Javad Zarif said Friday that Washington would bear responsibility for the consequences of any possible “adventure” in the region. His comments came during a call with his Kuwaiti counterpart, according to the ministry’s website.

Already, America has conducted B-52 bomber flyovers and sent a nuclear submarine into the Persian Gulf over what Trump administration officials describe as the possibility of an Iranian attack on the anniversary of Soleimani’s killing.

Strategic calculations on both sides have been complicated by the political transition in Washington to President-elect Joe Biden’s administration, which may seek new paths in dealing with Iran.

Also Friday, Iranian video sharing services released an English-language song filmed abroad that praises Soleimani. Footage of Soleimani’s funeral and some videos of him in the battlefield were also shown.