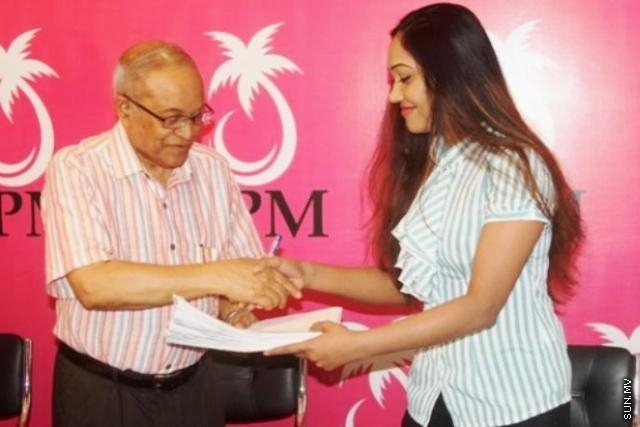 An official from the PPM, one of the largest political parties of the Maldives, told Sun today that Nahla signed for PPM in the presence of Maumoon Abdul Qayyoom, the Party’s Interim President.

The official also said that Nahla handed over some 100 membership application forms for PPM to the Interim President in the ceremony of her signing.

Ahmed Mahloof, PPM Council Member and Parliamentarian, said today that it is “a great leap for PPM as a political party, to have a capable person as Nahla, who has a Master’s Degree in political science”.

According to the official statistics of the Elections Commission of the Maldives, PPM currently has 17489 registered members. The figures for MDP and DRP, the two other leading political parties of the country are 48503 and 26900. Analysts say that these figures are not reflective of the political division in the country, as many people signed for MDP while MDP was in power, as a result of pressure and other factors, while most people in DRP are actually supporters of PPM, who have not yet moved sides, after PPM became a political party after remaining as a faction within DRP for months.