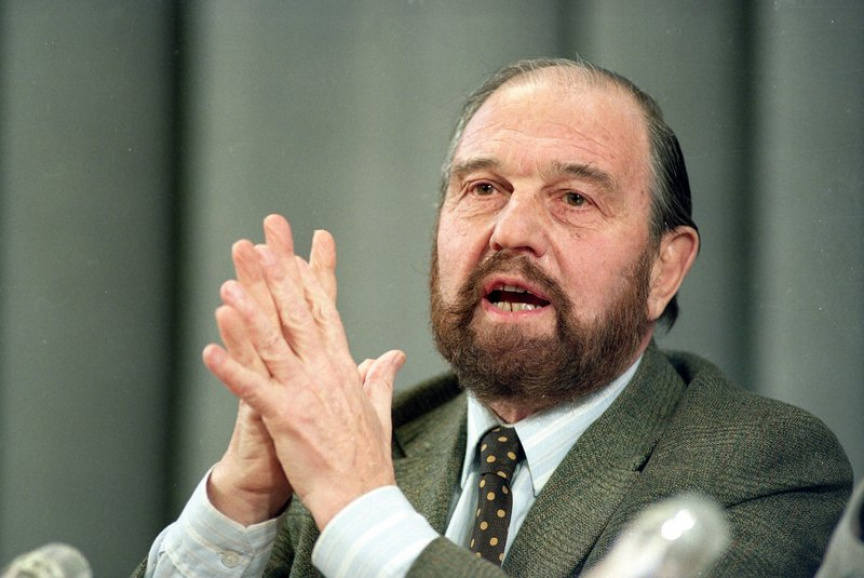 In this Jan. 15, 1992 file photo, George Blake, a former British spy who doubled as a Soviet agent, gestures during a news conference in Moscow.(AP Photo/Boris Yurchenko, File)

MOSCOW (AP) — George Blake, a former British intelligence officer who worked as a double agent for the Soviet Union and passed some of the most coveted Western secrets to Moscow, has died in Russia. He was 98.

Russia’s Foreign Intelligence Service, known as SVR, announced his death Saturday in a statement, which didn’t give any details. Russian President Vladimir Putin expressed his condolences, hailing Blake as a “brilliant professional” and a man of “remarkable courage.”

As a double agent, Blake exposed a Western plan to eavesdrop on Soviet communications from an underground tunnel into East Berlin. He also unmasked scores of British agents in Soviet bloc countries in Eastern Europe, some of whom were executed. Blake has lived in Russia since his daring escape from a British prison in 1966 and was given the rank of Russian intelligence colonel.

Britain considered Blake to be a traitor, but the man himself never agreed with that assessment and said that he had never actually “felt” British.

“To betray, you first have to belong. I never belonged,” he said.

Born in the Netherlands, Blake joined British intelligence during World War II. He was posted to Korea when the war there erupted in 1950 and was detained by the Communist north. He said he volunteered to work for the Soviet Union after witnessing the relentless U.S. bombing of North Korea.

In a statement issued in 2017 through the Russian Foreign Intelligence Service, Blake emphasized that he decided to switch sides after seeing civilians massacred by the “American military machine.”

“I realized back then that such conflicts are deadly dangerous for the entire humankind and made the most important decision in my life — to cooperate with Soviet intelligence voluntarily and for free to help protect peace in the world,” Blake said.

In a 2012 interview with the Russian government daily Rossiyskaya Gazeta, Blake shared some details of his cloak-and-dagger adventures, including meetings with a Soviet liaison in East Berlin. He said that once a month he would take a train to East Berlin, make sure that he wasn’t being followed, and go by car to a secret apartment where he and his contact would have a talk accompanied by a glass of Soviet-made sparkling wine.

A Polish defector exposed Blake as a Soviet spy in 1961. He was convicted on spying charges in Britain and sentenced to 42 years in prison. In October 1966, he made a bold escape with help from several people he met while in custody.

Blake spent two months hiding at his assistant’s place and was then driven across Europe to East Berlin inside a wooden box attached under a car.

His British wife, whom he left behind along with their three children, divorced him, and he married a Soviet woman and they had a son. He was feted as a hero, decorated with top medals, and given a country house outside Moscow.

In the Soviet Union, Blake maintained contacts with other British double agents. He said he met regularly with Donald Maclean and Kim Philby, members of the so-called Cambridge Five, and he said he and Maclean were particularly close.

Blake said he adapted well to life in Russia and once joked at a meeting with Russian intelligence officers that he’s like a “foreign-made car that adapted well to Russian roads.”

“He made a truly invaluable contribution to ensuring strategic parity and preserving peace,” Putin said in his telegram of condolences.

Blake noted in his 2017 statement that Russia has become his “second motherland,” and thanked SVR officers for their friendship and understanding. He said that Russian intelligence officers have a mission to “save the world in a situation when the danger of nuclear war and the resulting self-destruction of humankind again have been put on the agenda by irresponsible politicians.”

Russia jails 5 over coal mine disaster that killed 51

Hundreds of migrants freezing in snow in Bosnia camp