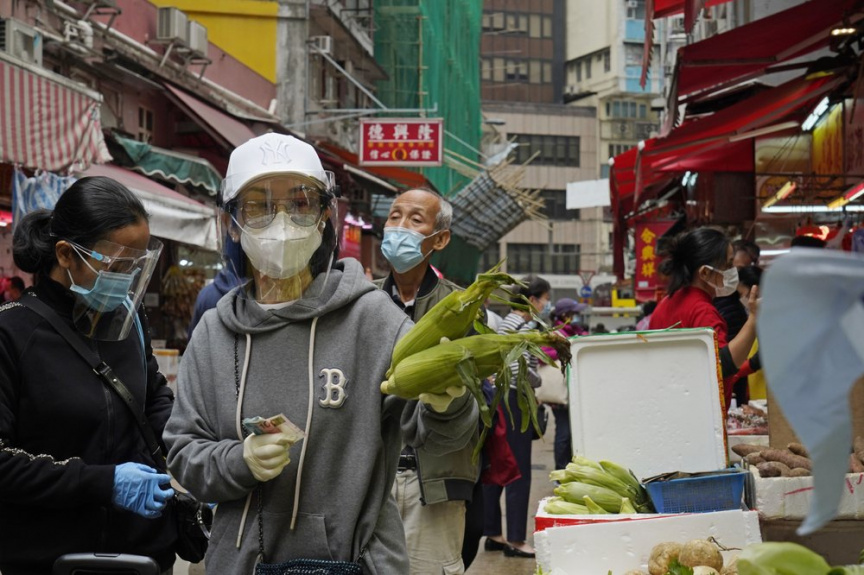 People wearing face masks to protect against the spread of the coronavirus shop at a local market in Hong Kong, Tuesday, Dec. 8, 2020. Hong Kong leader Carrie Lam said social distancing measures will be tightened as cases of the coronavirus continue to surge, with a ban on nighttime dining and more businesses ordered to close. (AP Photo/Kin Cheung)

HONG KONG — Hong Kong is re-imposing a ban on in-restaurant dining after 6:00 p.m. and closing gyms, beauty parlors and other businesses and public venues as it tries to get a grip on the latest wave of coronavirus infections in the territory.

Restaurants may only provide takeout between 6:00 p.m. and 5:00 a.m. and while open, must limit numbers of patrons at 50 percent of capacity with diners restricted to two per table. Enforcement of the new measures will begin Thursday and remain in effect for two weeks.

Hong Kong has already limited public gatherings to just two people and closed bars and other entertainment venues, and the new orders further reduce the number of shopping, dining and leisure options available to residents of the crowded city of 7.5 million. Swimming pools, night clubs, karaoke halls and mahjong parlors are also among the establishments ordered closed.

Hong Kong on Wednesday reported an additional 100 cases, bringing its two-week total to 1,274. Most are cases of local transmission and the origins of 303 remain unknown, according to the government’s Center for Health Protection. Hong Kong has reported a total of 7,075 confirmed cases since the start of the pandemic, with 112 deaths.

Deaths from the coronavirus in the U.S. have soared to more than 2,200 a day on average, matching the peak reached last April. The average cases per day has eclipsed 200,000 for the first time ahead of more holiday gatherings.

Meanwhile, the Food and Drug Administration says Pfizer’s vaccine is strongly protective against COVID-19 and appeared safe in the agency’s initial review, setting the stage for possible approval within days in the U.S.

HERE’S WHAT ELSE IS HAPPENING:

SEOUL, South Korea -- South Korea has reported 686 new cases of the coronavirus, tying its second-highest daily jump since the emergence of the pandemic, as a resurgence driven by the greater capital area threatens to erase hard-won gains against the virus.

The Korea Disease Control and Prevention Agency said Wednesday that 536 of the new cases were reported from the Seoul metropolitan area, where new clusters of infections have been popping up from seemingly everywhere, including restaurants, markets, saunas, hospitals, long-term care facilities and army units.

The country’s caseload is now at 39,432, including 556 deaths. The agency said 149 among 8,699 active patients were in serious or critical condition, a group that is being closely monitored amid concerns about a possible shortage in intensive-care beds.

South Korea had also reported 686 cases on March 2 during a major outbreak in its southeastern region, which health workers managed to contain by April with an aggressive test-and-quarantine campaign.

While South Korea had been seen as a success story against COVID-19 since, critics said the country let its guard down by easing social distancing restrictions to the lowest tier in October, even as experts warned of a surge during cold weather months when people spend longer hours indoors.