UK’s Johnson to head to Brussels amid Brexit talks deadlock 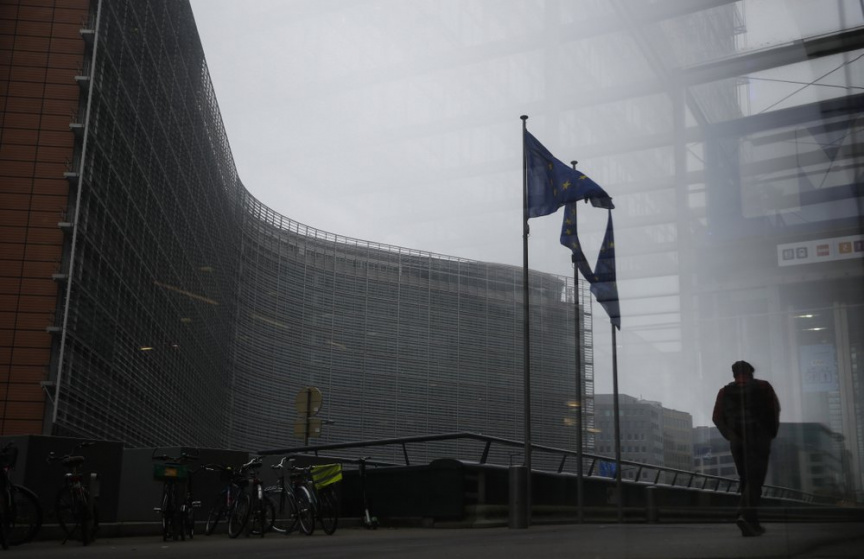 A pedestrian walks past the European Commission headquarters in Brussels, Monday Dec. 7, 2020. One of the most intense days in the long-running Brexit trade negotiations started off with little good news about any progress on the talks Monday, with the United Kingdom and the European Union seemingly still stuck on the same issues that have dogged the standoff for months. (AP Photo/Francisco Seco)

BRUSSELS (AP) — More than four years after helping set Britain’s course out of the European Union, Prime Minister Boris Johnson is headed to EU headquarters to try to finish the job.

With less than a month until the U.K.’s economic rupture with the European Union and talks on a new trade deal at a standstill on three crucial issues, Johnson and European Commission President Ursula von der Leyen agreed Monday to meet in person “in the coming days” to see whether they can find common ground.

Brussels is dangerous territory for Brexit-backing British leaders. Johnson’s predecessor, Theresa May, came time and again to negotiate a Brexit deal, only to see it repeatedly rejected by her own Parliament, ending her top-level career. Johnson will be hoping for a quick in-and-out that leaves his reputation intact and his country on course for a free trade deal with its biggest economic partner.

Johnson and von der Leyen spoke by phone Monday for the second time in 48 hours, as their negotiators were stuck in gridlocked trade talks. They said after the call that that “significant differences” remained on three key issues — fishing rights, fair-competition rules and the governance of future disputes — and “the conditions for finalizing an agreement are not there.”

The two leaders said in a joint statement they planned to discuss the remaining differences “in a physical meeting in Brussels in the coming days.”

Despite the continuing impasse, plans for a top-level meeting will be seen as a sign there is still a chance of a deal, though No. 10 Downing St. said the situation was “tricky” and failure a distinct possibility.

No timing was given for the face-to-face meeting. Leaders of the 27 EU nations are due to hold a two-day summit in Brussels starting Thursday.

EU chief negotiator Michel Barnier had no news of a breakthrough when be briefed ambassadors of the 27 member states early Monday on the chances of a deal with London before the Dec. 31 deadline.

Penny Mordaunt, a junior minister for Brexit planning, told lawmakers in the House of Commons that the “level playing field” — competition rules that Britain must agree to to gain access to the EU market — was the most difficult unresolved issue.

Officials on both sides said there were also major differences over the legal oversight of any trade deal and European boats’ access to U.K. waters.

While the U.K. left the EU politically on Jan. 31, it remains within the bloc’s tariff-free single market and customs union through Dec. 31. Reaching a trade deal by then would ensure there are no tariffs and trade quotas on goods exported or imported by the two sides, although there would still be new costs and red tape.

Both sides would suffer economically from a failure to secure a trade deal, but most economists think the British economy would take a greater hit because the U.K. does almost half its trade with the bloc.

EU member states have to unanimously support any post-Brexit trade deal and the agreement still needs to be voted on by the European parliament, procedures that would push any deal right up to the end-of-year deadline.

While both Britain and the EU say they want a trade deal, trust and goodwill are strained after months of testy negotiations.

In a further complication, Johnson’s government on Monday revived legislation that breaches the legally binding Brexit withdrawal agreement it struck with the EU last year.

The U.K. government acknowledges that the Internal Market Bill breaks international law, and the legislation has been condemned by the EU, U.S. President-elect Joe Biden and scores of British lawmakers, including many from Johnson’s own Conservative Party.

The House of Lords, Parliament’s upper chamber, removed the law-breaking clauses from the legislation last month, but Johnson’s government is asking lawmakers to put them back in.

Britain says the bill, which gives the government power to override parts of the withdrawal agreement relating to trade with Northern Ireland, is needed as an “insurance policy” to protect the flow of goods within the U.K. in the event of a no-deal Brexit. The EU sees it as an act of bad faith that could imperil Northern Ireland’s peace settlement.

On Wednesday the U.K. plans to introduce a Taxation Bill that contains more measures along the same lines and would further irritate the EU.

But the British government offered the bloc an olive branch on the issue, saying it would remove the lawbreaking clauses if a joint U.K.-EU committee on Northern Ireland found solutions in the coming days. It said talks in the committee, which continued Monday, had been constructive.

Britain leaves the EU, leaps into the unknown