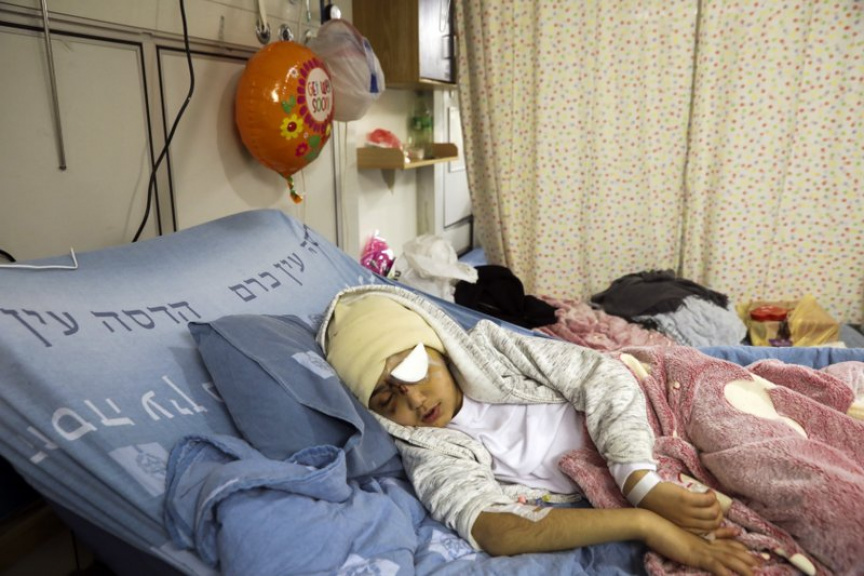 FILE - In this Feb. 20, 2020 file photo, 9-year-old Palestinian boy Malik Eissa rests in Hadassa hospital in Jerusalem. Israeli authorities have cleared police of any wrongdoing in the case of Eissa who lost an eye after apparently being shot in the face by an Israeli officer with what appeared to be a sponge-tipped munition last February. In a statement sent to The Associated Press on Saturday, Dec. 5, 2020, the Israeli Justice Ministry said its unit for internal police investigations concluded that while the incident was “sad,” there were insufficient grounds for prosecution after interviewing witnesses and reviewing video footage and other evidence. (AP Photo/Mahmoud Illean, File)

JERUSALEM (AP) — Israeli authorities have cleared police of any wrongdoing in the case of a 9-year-old boy who lost an eye after apparently being shot in the face by an Israeli officer earlier this year.

Malik Eissa was struck by what appeared to be a sponge-tipped munition last February and lost vision in his left eye, and his family says he hasn’t returned to school because of recurring medical treatments and the embarrassment of being disfigured and reliant on a prosthetic eye.

Residents said he had just gotten off a school bus in the Palestinian neighborhood of Issawiya in east Jerusalem when police opened fire. Police said at the time they had responded to riots in the tense neighborhood and used what they call non-lethal weapons.

In a statement sent to The Associated Press on Saturday, the Israeli Justice Ministry said its unit for internal police investigations concluded that while the incident was “sad,” there were insufficient grounds for prosecution after interviewing witnesses and reviewing video footage and other evidence.

It said police were conducting an arrest operation at the time and were attacked by a group of stone throwers. It also said that medical experts could not determine whether the boy had been struck by a bullet or a stone. It said, however, that the investigations unit ordered a review of operational conduct, including its use of sponge-tipped bullets in civilian areas.

Malik’s father, Wael Issa, told AP that his family had been the victim of injustice twice — first when the boy was shot and now with the investigation being closed.

“When my son was shot, the members of the investigative unit came to the hospital. They were about to cry. They told me, ‘Don’t worry, those responsible for shooting him will be held accountable,’” he said Sunday. “But 10 months after investigating, they decided to close the file.”

He said the boy suffers from constant headaches and psychological problems and has not returned to school because of repeated surgeries and embarrassment about his appearance.

He said his son finally agreed to return to school two weeks ago after receiving a glass eye, but stopped going after a couple of days because of an embarrassing incident.

“The eye fell out in front of the students. He feels terrible,” he said. “Frankly speaking I don’t believe I will ever get justice in this system.”

“Every individual case is isolated to a series of technical details, as though this was a singular incident, rather than an open fire policy,” it said. It accused police of operating within “an oppressed civilian population to enforce an occupation and annexation,” leading to civilian casualties and impunity for those who harm them.

Issawiya is part of east Jerusalem, which Israel captured in the 1967 Middle East war along with the West Bank and the Gaza Strip, territories the Palestinians want for a future state. Israel later annexed east Jerusalem in a step that is not internationally recognized and views all of the city as its capital. The Palestinians claim east Jerusalem as their future capital.

Issawiya has been the site of frequent police raids that often ignite demonstrations or clashes. Police blame the violence on local youths, whom they accuse of throwing stones and firebombs at patrol vehicles.

Over the weekend, a 13-year-old Palestinian boy was killed by Israeli army fire during clashes with stone throwers in the occupied West Bank, according to the Palestinian Health Ministry. The Israeli military said it used “riot dispersal means,” including .22-caliber bullets, and said that military police had opened an investigation.

The U.N. envoy in the region has called on Israel to swiftly investigate what he called a “shocking and unacceptable” incident.

Explosives experts working to defuse mine on oil tanker