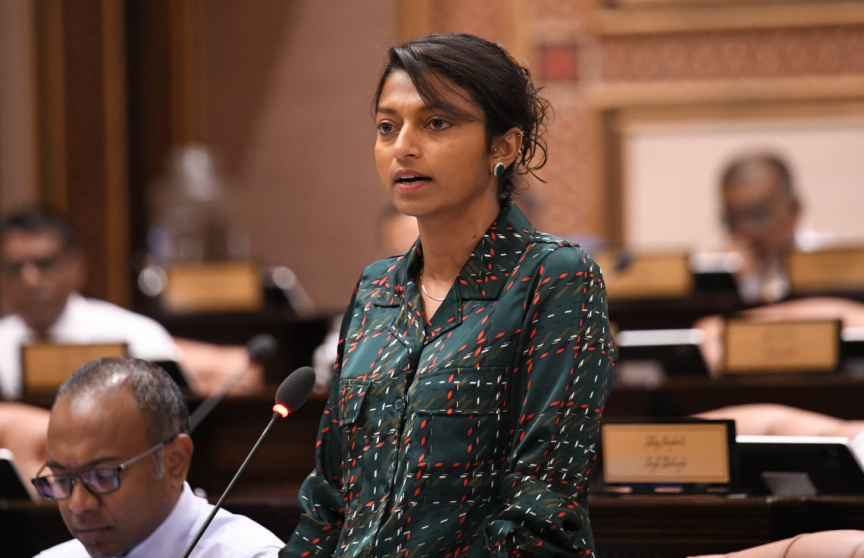 Deputy Speaker, North Galolhu MP Eva Abdulla has presented a revision to the report by the Budget Committee, designed to require the government to submit detailed quarterly reports on loans, sovereign guarantees, sukuks and T-bonds to the Parliament.

Eva presented the revision during the parliamentary sitting on Monday morning.

“The Finance Ministry must present detailed information regarding this in the form of quarterly reports to you [the Speaker],” she said.

Eva said that she had assumed it was already in practice, but learned different when the Parliament began work on collecting details of debt incurred over the last five years.

“This has not been practiced to date. We learned the difficulties of lack of such detailed information with the Parliament when the work on collecting details of loans of the last five years began,” she said.

Eva said that it is crucial that the Parliament’s Public Accounts Committee be privy to information regarding sukuks and bonds sold by the government, and that it should not be left to the Finance Ministry alone.

“This should not be done in secrecy, or by the Finance Ministry alone, even if not in secrecy. The Parliament has a Public Accounts Committee. And the Parliament is the oversight committee. Even if the Parliament approved the budget in accordance with the government’s proposals, we need detailed information and need to be aware, if the sale or non-sale of sukuk is so heavily linked with our revenue,” she said.