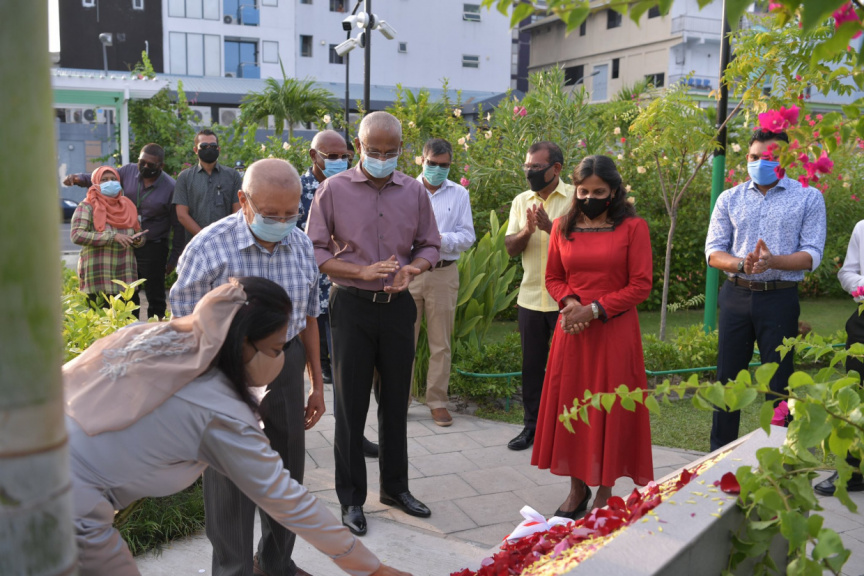 Work on the Lonuziyaaraih Park began early last year, and after multiple delays, was completed in September. However, the park had remained unopened in light of the COVID-19 situation in the capital.

The park was opened in a small ceremony this Wednesday evening by former Housing Minister Umar Zahir.

The opening of the park coincides with the Republic Day, and was attended by President Ibrahim Mohamed Solih, First Lady Fazna Ahmed, and Parliament Speaker and former President Mohamed Nasheed.

The Lonuziyaaraih Park was developed as a green area in the congested Male’ City where people can relax and unwind. The park has a variety of vegetation, some of which was grown in nurseries, as well as a pond, a jogging track, and benches.

Mayor Shifa has stated that the city council will provide the opportunity for the park to be used as a venue for weddings and other events.

The city council previously stated that the Lonuziyaaraih Park will be the biggest public park in Maldives once it opens.

The location where the park is situated in was used as a construction site during the building of the bridge linking Male’ City with Hulhumale’ and Hulhule’.

Four-hour vehicle ban to be observed in Male’ on Eid