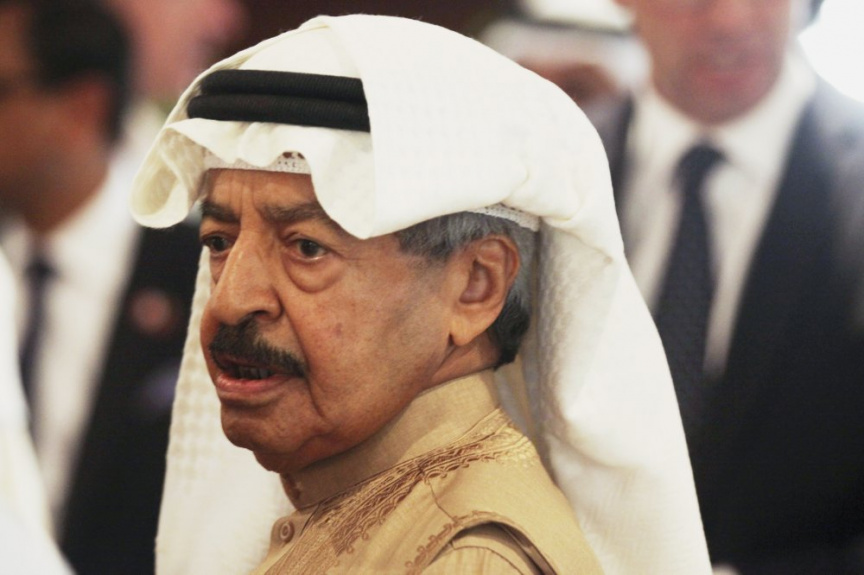 DUBAI, United Arab Emirates (AP) — Bahrain’s Prince Khalifa bin Salman Al Khalifa, one of the world’s longest-serving prime ministers who led his island nation’s government for decades and survived the 2011 Arab Spring protests that demanded his ouster over corruption allegations, died on Wednesday. He was 84.

Bahrain’s state-run news agency announced his death, saying he had been receiving treatment at the Mayo Clinic in the United States, without elaborating. The Mayo Clinic did not immediately respond to a request for comment.

Prince Khalifa’s power and wealth could be seen everywhere in this small nation off the coast of Saudi Arabia home to the U.S. Navy’s 5th Fleet. His official portrait hung for decades on walls alongside the country’s ruler. He had his own private island where he met foreign dignitaries, complete with a marina and a park that had peacocks and gazelle roam its grounds.

The prince represented an older style of Gulf leadership, one that granted patronage and favors for support of the Sunni Al Khalifa family. That style would be challenged in the 2011 protests by the island’s Shiite majority and others, who demonstrated against him over long-running corruption allegations surrounding his rule.

Though less powerful and frailer in recent years, his machinations still drew attention in the kingdom as a new generation now jostles for power.

Bahrain’s Royal Court announced a week of official mourning, with a burial coming after the return of his body. State television aired a recitation of Quranic verses, showing a black-and-white image of the prince.

Prince Khalifa was born into the Al Khalifa dynasty that for more than two centuries has ruled Bahrain, an island in the Persian Gulf whose name in Arabic means the “two seas.” The son of Bahrain’s former ruler, Sheikh Salman bin Hamad Al Khalifa who ruled from 1942 to 1961, the prince learned governance at his father’s side as the island remained a British protectorate.

Prince Khalifa’s brother, Sheikh Isa bin Salman Al Khalifa, took power in 1961 and served as monarch when Bahrain gained its independence from Britain in 1971. Under an informal arrangement, Sheikh Isa handled the island’s diplomacy and ceremonial duties while Prince Khalifa ran the government and economy.

The years that followed saw Bahrain develop rapidly as it sought to move beyond its dependence on dwindling oil reserves. Manama at that time served as what Dubai in the United Arab Emirates ultimately became, a regional financial, service and tourism hub. The opening of the King Fahd Causeway in 1986 gave the island nation its first land link with its rich and powerful neighbor, Saudi Arabia, and offered an escape for Westerners in the kingdom who wanted to enjoy Bahrain’s alcohol-soaked nightclubs and beaches.

But Prince Khalifa increasingly saw his name entangled in corruption allegations, such as a major foreign corruption practices case against aluminum producer Alcoa over using a London-based middleman to facilitate bribes for Bahraini officials. Alcoa agreed to pay $384 million in fines to the U.S. government to settle the case in 2014.

The U.S. Embassy in Manama similarly had its own suspicions about Prince Khalifa.

“I believe that Shaikh Khalifa is not wholly a negative influence,” former U.S. Ambassador Ronald E. Neumann wrote in a 2004 cable released by WikiLeaks. “While certainly corrupt he has built much of modern Bahrain.”

Those corruption allegations fueled discontent, particularly among Bahrain’s Shiite majority who still today complain of discrimination by the government. In February 2011, protesters inspired by Arab Spring demonstrations across the Mideast filled the streets and occupied the capital Manama’s Pearl Roundabout to demand political reforms and a greater say in the country’s future.

While some called for a constitutional monarchy, many others pressed for the removal of the long-ruling prime minister and other members of the Sunni royal family altogether, including King Hamad bin Isa Al Khalifa.

At one point during the height of the unrest in March 2011, thousands of protesters besieged the prime minister’s office while officials met inside, demanding that Prince Khalifa step down over corruption allegations and an earlier, deadly crackdown on the demonstrations. Protesters also took to waving one Bahraini dinar notes over allegations Prince Khalifa bought the land on which Bahrain’s Financial Harbour development sits for just a single dinar.

Robert Gates, a former U.S. secretary of defense under President Barack Obama, wrote in his memoirs that he urged the king at the time to force Prince Khalifa from the premiership, describing him as “disliked by nearly everyone but especially the Shia.”

Bahraini officials soon crushed the protests with the backing of troops from neighboring Saudi Arabia and the United Arab Emirates. A government-sponsored report into the protests and crackdown later described security forces beating detainees and forcing them to kiss pictures of King Hamad and Prince Khalifa.

But while other hard-line members of the Al Khalifa family actively pushed for a confrontation with Shiites, Prince Khalifa maintained contacts with those the government opposed. Even with his influence waning, he called Qatar’s ruling emir, Sheikh Tamim bin Hamad Al Thani, in 2019 during the holy month of Ramadan despite Bahrain being one of four Arab nations boycotting Doha in a political dispute.

“Khalifa bin Salman could and did work with both Sunni and Shia, especially through his relations with Bahrain’s business community,” Diwan said. “He brought this same personalistic approach to relations with other Gulf monarchs, and was genuinely uncomfortable with the new politics exemplified by coarse attacks on the Qatari leadership.”

Slowly though, Prince Khalifa’s influence waned as he faced unexplained health problems. He was admitted to hospital in November 2015 but was later released. He also traveled to southeast Asia for medical appointments. In late November 2019, he traveled to Germany for undisclosed medical treatments, remaining there for months.

In September, a U.S. Air Force C-17 flying hospital flew from Germany to Rochester, Minnesota, following by a royal Bahraini aircraft. While U.S. and Bahraini officials declined to comment on the flights, it came just after America offered the same care to Kuwait’s ruling emir just before his death.

US, Israel worked together to track, kill al-Qaida No.2