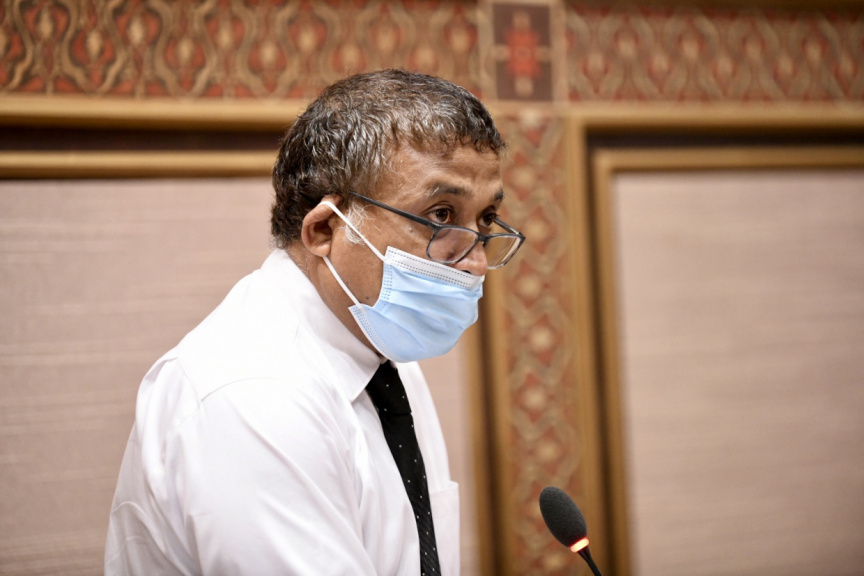 Housing and Planning Minister Mohamed Aslam has landed himself in hot water over the road development project of R. Dhuvaafaru, which was initially not included in the state budget, but later contracted outside of the allocated state budget.

The Minister was summoned to the parliament today, where he faced a number of questions from MPs who expressed concern over the project and its awarding.

The project was awarded on September 9, for a total of MVR 37.8 million. This led to criticism by some MPs alleging that some ministers were favoring some constituencies more than others due to close relations.

The Minister responding to one such inquiry today said that the phase 2 road development project was not a specific project which was awarded but to resolve the issues faced by the roads of Dhuvaafaru, which were not solved in the phase 1 project. MP for Fonadhoo Moosa Siraj regarding the answer by the Minister said that the appropriate policy for the project extension was not followed.

The MP said that it was permitted to increase the variation if it did not exceed certain limits in terms of project extensions.

Vilufushi MP Hassan Afeef said that budget expenditure policies were very much stipulated in the constitution which meant that it should be followed.

“Funding (Projects) included in the budget has a specific policy whereby only in emergencies or matters of importance where funding is low. So, I want to clarify what the priorities of the state are according to what the honorable Minister has stated.” Said MP Afeef who questioned why the policy was not followed.

Minister Aslam repeatedly said that the Dhuvaafaru project was to resolve the issues faced in the island which were not solved in the initial road development project.

MP for Central Henveiru and MDP PG Group leader Ali Azim also expressed concern for carrying out projects not included in the budget.

He added that some institutions were conducting operations in violation of the constitution and questioned whether the project was not included in the budget and as to how this happened.

Minister Aslam deflected this question by once again saying that it was an extension, which led to Speaker Mohamed Nasheed repeating the question.

“Honorable Minister, the question today is that. MVR 37 million was included in the budget. Whether the project was carried out when the budget did not include it.” Said Nasheed.

Minister Aslam once again refrained from directly responding to the question and stated that projects have not been run in such a manner of funding not included in the budget.