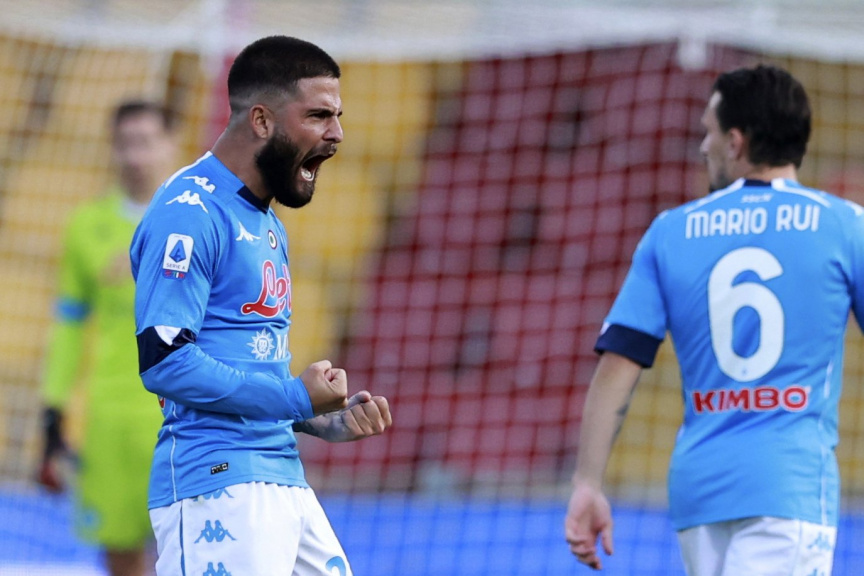 Napoli's Lorenzo Insigne, left, celebrates after scoring during a Serie A soccer match between Napoli and Benevento, in the Ciro Vigorito stadium in Benevento, Italy, Sunday, Oct. 25, 2020. (Alessandro Garofalo/LaPresse via AP)

ROME (AP) — Brother against brother on the field. World Cup-winning teammates against each other on the touchline.

Family ties and personal history were integral threads in the regional derby between Napoli and Benevento in Serie A on Sunday.

Lorenzo and Roberto Insigne each scored and Gennaro Gattuso’s Napoli got the better of Filippo Inzaghi’s Benevento in a 2-1 win.

It was the first time that the Insigne brothers had played against each other and they accounted for the opening goals.

Younger brother Roberto Insigne, who began his career in Napoli’s youth system, scored first from close range after being set up by Gianluca Lapadula on the half-hour mark to put Benevento ahead.

“I’m very, very happy but I’m really sorry to score my first goal in Serie A against my brother,” Roberto Insigne said.

Italy standout Lorenzo Insigne appeared to have replied for Napoli shortly after the break with a low shot around a defender into the far corner but the goal was waved off by VAR for offside.

Lorenzo Insigne kept at it, though, and he finally connected with a long, splendid shot that went in off the underside of the cross bar on the hour mark.

After Lorenzo scored, he went over to his brother and shared some words.

“I told him that I scored with his foot -- the left one,” Lorenzo Insigne said.

Seven minutes later, Lorenzo Insigne headed just over and seconds after that Andrea Petagna won it for visitors Napoli with a shot from the center of the area.

The winning goal was a product of two substitutes, with Matteo Politano setting up Petagna, giving Gattuso a tactical edge over his former AC Milan and Italy teammate Inzaghi.

Besides winning two Champions League titles together at Milan, Gattuso and Inzaghi were also members of the Italy squad that won the 2006 World Cup.

Napoli moved within one point of Serie A leader AC Milan -- even though the Partenopei have won all four of the matches they’ve actually played just like the Rossoneri.

Napoli was handed a 3-0 loss and penalized one point for failing to show for a game at Juventus after a few cases of coronavirus within the squad.

Gattuso was looking for a reaction from his team after getting upset 1-0 by Dutch club AZ Alkmaar in the Europa League.

Benevento, which Inzaghi guided to the Serie B title by a large margin last season, is 12th.

Inzaghi and Gattuso also coached against each other two years ago when Inzaghi was at Bologna and Gattuso was in charge of Milan.

Nine-time defending champion Juventus struggled to a 1-1 draw at home with Hellas Verona.

Substitute Dejan Kulusevski equalized 12 minutes from time after Andrea Favilli had given Verona the lead.

Kulusevski used a series of fakes to befuddle his marker before unleashing a shot into the far corner.

Juventus thought it had taken the lead just before the break but Alvaro Morata’s goal was annulled by VAR for offside.

Juan Cuadrado and Paulo Dybala struck the woodwork in the second half.

It was the third draw in five matches for Juventus, which remained unbeaten and moved three points behind Milan.

Juraj Kucka scored a stoppage-time penalty for Parma in a 2-2 draw with promoted Spezia.