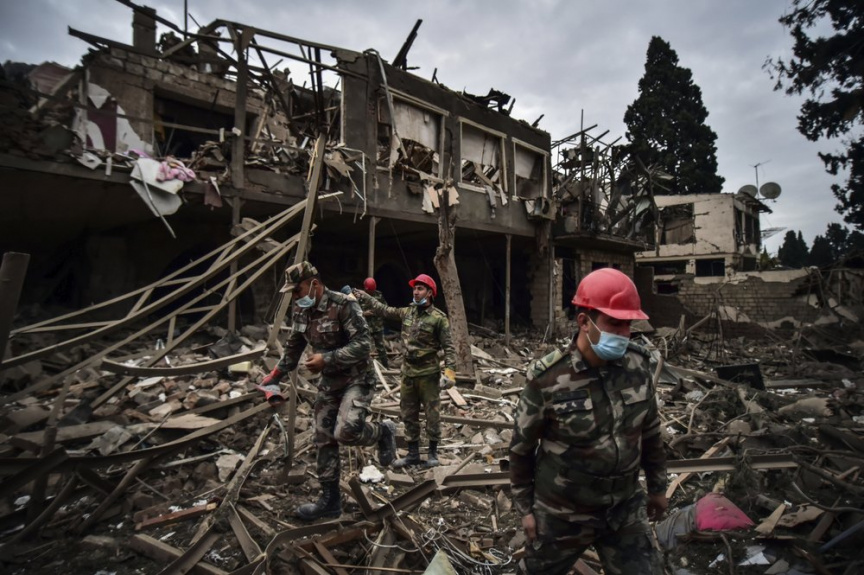 FILE - In this Oct. 11, 2020, file photo, Azerbaijani soldiers and firefighters search for survivors after rocket fire overnight by Armenian forces in a residential area in Ganja, Azerbaijan's second-largest city, near the border with Armenia. A Russian attempt to broker a cease-fire to end the worst outbreak of hostilities over the region of Nagorno-Karabakh in more than a quarter-century has failed to get any traction, with Azerbaijan and Armenia trading blame for new attacks. (Ismail Coskun/IHA via AP, File)

YEREVAN, Armenia (AP) — Armenia and Azerbaijan reported more fighting on Tuesday over the separatist territory of Nagorno-Karabakh, where clashes have continued for over three weeks despite two attempts at establishing a cease-fire.

Azerbaijan’s Defense Ministry said the hostilities carried on overnight and accused Armenian forces of shelling the Terter and the Agdam regions of Azerbaijan in the morning. Two civilians were killed and one wounded in the Terter region, Azerbaijani authorities said.

Armenian Defense Ministry spokeswoman Shushan Stepanian reported “intensive fierce battles” on Tuesday morning in the southern areas of the conflict zone, and alleged that Azerbaijani forces were using aviation and artillery in the northern sector.

The two countries announced a cease-fire on Saturday in a bid to halt the fighting that has killed hundreds since Sept. 27, when the latest outbreak of hostilities started, marking the worst escalation of a decades-old conflict. The agreement — just like a cease-fire deal brokered by Russia a week earlier — was almost immediately challenged by mutual claims of violations and the fighting resumed unabated.

Azerbaijani President Ilham Aliyev said the nation’s military reclaimed control over multiple towns and villages in the Jabrayil and Fizuli regions, two of the seven Azerbaijani regions outside Nagorno-Karabakh that were seized by Armenian forces during the war in the early 1990s.

Aliyev also said Azerbaijani forces took control of the town of Zangilan and several nearby villages just south of Nagorno-Karabakh, as well as a number of villages in the region.

According to Nagorno-Karabakh officials, 773 of their troops have been killed since Sept. 27, along with over 30 civilians. Azerbaijan hasn’t disclosed its military losses, but says 61 civilians have died so far and 291 have been wounded.

The deadly flighting prompted calls for the cessation of hostilities from around the globe and raised concerns of a wider conflict involving Turkey, which has publicly supported Azerbaijan, and Russia, which has a security pact with Armenia.

On Oct. 9, Moscow hosted the foreign ministers of Armenia and Azerbaijan. After more than 10 hours of talks, they announced a cease-fire deal, which was violated minutes after it took force.

The new truce announced on Saturday followed Russian Foreign Minister Sergey Lavrov’s calls with his counterparts from Armenia and Azerbaijan, in which he strongly urged them to abide by the Moscow deal. Despite the agreement, both sides have reported new attacks.

The Armenian and Azerbaijani foreign ministers are scheduled to meet with U.S. Secretary of State Mike Pompeo in Washington on Friday. Last week Pompeo said Washington was making diplomatic efforts to help achieve a sustainable settlement to the conflict and called on both countries to “implement their agreed-upon commitments to a cease-fire.”

Russia, the U.S. and France co-chair the so-called Minsk Group, set up by the Organization for Security and Cooperation in Europe in the 1990s to mediate the conflict.

Armenians torch their homes on land ceded to Azerbaijan